John R. Wooden celebrated his 99th birthday on Oct. 14. That’s 99 great years for a man who is considered the greatest coach in sports and one of the most influential people in the world.

I had the honor of meeting Coach Wooden in March of 1995. To this day, that was the best interview I’ve ever experienced as a journalist and the clip is stored in my safety box.

I remember it well.

It was the week of the first round of the NCAA Tournament and Wooden was doing a promotional appearance at a bank in La Crescenta, Calif. I couldn’t pass up the opportunity so I got a hold of the bank’s public relations person and scheduled a sit-down interview with Coach Wooden.

It was around lunchtime when I talked to Coach, who was 85 years old at the time. His body was moving slow but his mind was as sharp as nails. I asked him how his health was, and he said he was doing fine. He talked about his grandchildren a lot and how he proud he is to have lived long enough to see them grow up. 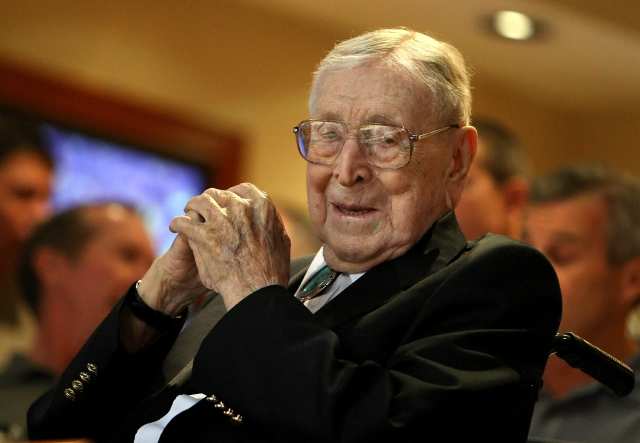 We discussed various subjects, from UCLA’s chances of winning the NCAA championship (which the Bruins did led by Ed O’Bannon) to why Coach Wooden thinks the dunk show should be disallowed to Coach’s disdain for too much showmanship on the court. Coach Wooden believes the slam dunk has become a detriment to the game because players tend to pass up the simple and more fundamentally play in favor of the more crowd-pleasing aerial acrobatic.

Coach Wooden was all about mastering the fundamentals, and who can argue the results. The man won 10 national championships and built college basketball’s greatest dynasty. He stressed it to all his players whether it’s UCLA All-Americans Kareem Abdul-Jabbar (although Coach Wooden still calls him Lew), Bill Walton and Marques Johnson or role players such as Mike Warren and Brad Holland. Repetition and practice was important to Wooden. He always made sure his teams practiced well because the preparation aspect of the game was key to the game execution.

“Failure to prepare is preparing to fail,” Wooden stresses.

Preparation is something that I always carry with me whether I’m coaching my youth basketball team or working on a story. I relay to my teams that practice is just like doing your school homework. When you do your homework and study for your exams, the pressure of failing doesn’t exist on the day of the test. In basketball, when you work on your fundamentals and improve your skills, there is no reason to be nervous about losing.

The most important aspect that I took from my time with Coach Wooden is that simplicity is the best way to eliminate life’s complications. Sometimes we fill our lives with unnessary stress. By keeping things simple, we get rid of the confusion and see a clearer picture of our goals and what we are trying to accomplish.