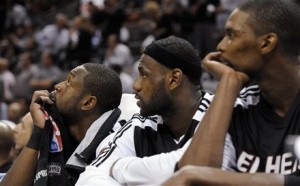 The Miami Heat have hit a rough patch in their title defense. LeBron James and Co. have lost five of their last eight games, the most recent one to the Portland Trail Blazers.

Despite leading by as much as 13 points, the Heat somehow let the Blazers hang around and eventually pull out a 92-90 come-from-behind win Thursday night in Portland.  Wesley Matthews made a 3-pointer to tie it at 88 with just under a minute to go, and after a Chris Bosh dunk Matthews hit another three to finally give the Blazers a 91-90 lead. LaMarcus Aldridge missed the first of two free throws with 10.4 seconds left for the final margin.

Nicolas Batum led the Blazers with 28 points, and Aldridge had 20 points and 15 rebounds. Matthews finished with 18 points. The Blazers held LeBron James to 15 points, snapping his 54-game streak with at least 20 points that dated back to last season.

Bosh had 29 points for the Eastern Conference-leading Heat, who dropped their second straight game.

The Heat went into the game ranked second-to-last in the NBA with an average of 39 rebounds a game. Against the Blazers they had 45. In the loss to Indiana in Jan. 8, Miami got outrebounded 55-36. And in a Jan. 4 loss to Chicago, Miami was outrebounded 48-28. Teams are beginning to figure that the best way to neutralize Miami’s explosive offense to keep them occupied on the boards. The one glaring weakness of the Heat is their lack of size up front. Bosh is a power forward playing center and James, who normally plays the wing, has dropped down to power forward for most of the season.

If Miami is going to repeat as NBA champs, the team must address its rebounding problems. To borrow a phrase from Pat Riley, “no rebounds, no rings.”

If Miami continues to struggle to rebound the ball, Alonzo Mourning may be forced to come out retirement.

The Heat are 0-2 on a current six-game road trip, and dropped to 7-8 overall away from American Airlines Arena. Portland was coming off a 125-119, overtime win over Orlando at the Rose Garden on Monday night.

Damian Lillard, the reigning repeat NBA Rookie of the Month, had 10 points and eight assists and became the first NBA player to make at least 75 3-pointers in his first 35 career games since Allen Iverson in 1996-97.