When Pat Riley took over the reigns of the Miami Heat franchise in 1996, he got the ball rolling with two important building blocks: center Alonzo Mourning and point guard Tim Hardaway.

Thirteen years later, the Heat will honor Hardaway for helping Riley “get the ball rolling” in Miami as his No. 10 jersey will be raised in a ceremony on Oct. 28 prior to the season-opener against the New York Knicks. It will be the second jersey retired in Heat history. Mourning’s No. 33 went to the rafters last season.

It is fitting that Hardaway will be honored on a night when the Heat will play the Knicks, their Eastern Conference nemesis during the late 1990s. The Heat-Knicks seven-game wars were instant classics, and Hardaway was right in the middle of the very physical battles. 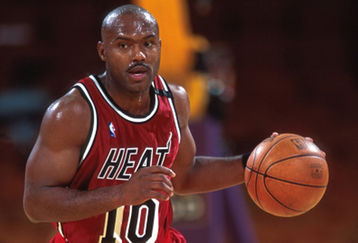 Tim Hardaway enjoyed his best season with the Heat in 1996-97, helping the team win 61 games.

Riley told the Associated Press that Hardaway is part of the “taproot and foundation for what we hope to be a long tradition of success here in Miami.”

Hardaway played 13 NBA seasons, nearly six of those with the Heat. He was a five-time All-Star and also played for Golden State, Dallas, Denver and Indiana during a career where he averaged 17.7 points and 8.2 assists per game. He finished his career 15,373 points and 7,095 assists, which ranks him 13th all-time.

He was 29 years old when he got traded to Miami. His best season with the Heat occured in the 1996-97 season when he averaged 20.3 points, 8.6 assists and made a career-high 203 3-pointers in 81 games. That Heat squad won 61 games and reached the conference finals, but lost to eventual champion Chicago.

Injuries to both knees robbed Hardaway of his foot speed during the latter stages of his career. But when healthy, the man nicknamed “The Bug” was one of the best PGs in the NBA. His best years came with the Warriors. From 1990 to ’95, Hardaway averaged more than 20 points and close to 10 assists.

To borrow a line from his commercial, “Timmy’s got skillz!”

In his prime, Hardaway could get by any defender, using his “Killer Crossover” dribble to embarrass the opposition. At 6-0 and 175 pounds, he was quick and powerful. He ran Don Nelson’s high-powered offense in Golden State to near perfection, teaming up with Chris Mullin and Mitch Richmond to form “Run TMC.”

Beyond the stat sheet, Hardway was also tough-minded and wasn’t afraid to take the big shot, two qualities that endeared him to Riley.

He also wasn’t afraid to open his mouth. Hardaway didn’t exactly endear himself to the gay community when he uttered his famous “I hate gay people” comment when asked how he would react if he played with an openly gay teammate. Hardaway later apologized for his insensitive statement.