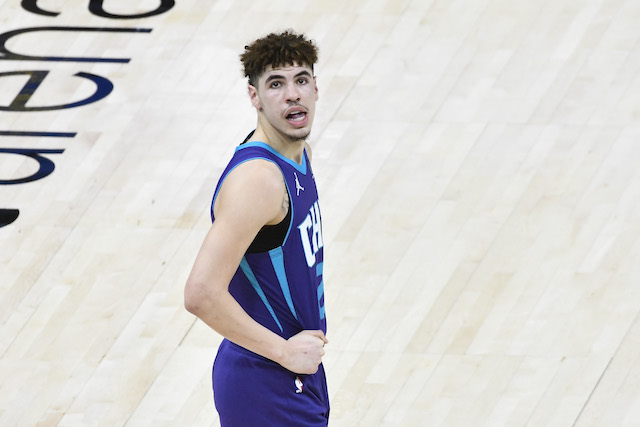 LaMelo Ball has turned the Hornets into one of the most exciting teams to watch. (Getty Images)

Charlotte Hornets guard LaMelo Ball has dished out more than 200 assists in his rookie season in the NBA. But one particular assist stood out.

It was early in the first quarter of a March 1 game between the Hornets and Trail Blazers in Portland. Ball was pushing the ball up the court on a 2-on-4 fastbreak when he made an extremely difficult play look routine. He had one teammate, Terry Rozier, running with him on the break. Ball threw a bounce pass with his right hand that skipped between Blazers defenders Gary Trent Jr. and Robert Covington and into the hands of a streaking Rozier for a layup.

To be able to fully appreciate the genius of Ball’s assist, you need to pause your TV and hit rewind a few times. It’s so much better when you slow down the video and watch the play over and over. And even after watching it a few times, you still marvel at what he had done. It was straight out of the Pistol Pete playbook or Magic Johnson highlight catalog. Only a handful of gifted ballers would even try it — and that includes current and retired players.

Ball didn’t have a proper angle to get the ball to Rozier, so he put an extra-special spin on the ball to get it through two defenders, with enough speed and touch to hit Rozier in stride. He could have used his left hand to make it easier. But that’s not how LaMelo rolls. So, he added a bit more degree of difficulty by using his right hand.

The spin & touch on that LaMelo pass! 😱 pic.twitter.com/beki2S2x53

The carefree, fearless style has defined LaMelo’s young basketball career. He’s a unique player who thinks differently and lets his basketball instincts take over. It’s the same basketball genius that has allowed him to be one of the most exciting players in the NBA.

“He’s damn good for his age,” LeBron James said of Ball, 19, after the Lakers played the Hornets for the first time. “His speed, his quickness, his ability to make shots and baskets in the paint … and he’s going to only get better. Every game is a learning experience for him. He’s going to get better as the season goes on and his career goes on.

“Him and ‘Zo are two very unique players in our league and they showcase that every night.”

Zo is LaMelo’s older brother, Lonzo, the fourth-year point guard for the New Orleans Pelicans. Lonzo spent the first two years of his NBA career with the Lakers but was traded to New Orleans in 2019 as part of the blockbuster trade that brought Anthony Davis to L.A. Having Lonzo as a mentor not only prepared LaMelo for the pro game but it also gave him the answers to the test. Watching Lonzo gave him a good view of what to expect in his first season in the Association.

“I think Melo has adjusted to the NBA game better than any of us ever thought this early in his career,” NBA legend and Hornets owner Michael Jordan told The Associated Press. “He has exceeded our expectations so far this season.”

When Air Jordan himself is throwing praise in your direction at this stage of your career, you’re doing something special. And LaMelo Ball is truly special. He’s a generational talent capable of carrying the burden of being a franchise player.

“He plays bigger than he is. He’s 6-7. He plays like a veteran already,” former NBA player and Hornets TV announcer Dell Curry said on Rex Chapman’s podcast. “His teammates love playing with him. He always has a smile on his face. He’s always thinking of the next play. He’s not afraid to say, ‘I made a mistake, that’s on me.’ How many rookies can you find around the league saying that wasn’t me. He’s a different breed.”

It shouldn’t come as a shocker that LaMelo is this good this soon. He was the third overall pick in the 2020 NBA draft and his father, LaVar, told everyone and anyone who would listen that his youngest son was going to light up the league. Love him or hate him, you have to give LaVar tons of credit for raising two talented ballers who carry themselves on and off the court very well.

It took Hornets coach James Borrego 20 games before finally feeling comfortable handing the keys to LaMelo and letting him run the show as the starting point guard. After coming off the bench through the first two months, Ball got his first start on Feb. 1 and hasn’t looked back since, averaging 20 points, six rebounds, six assists since becoming a full-time starter.

“He has improved in basically every area from the day he stepped in here. I think now that he’s comfortable with his teammates and the system, it’s really about managing the game,” Borrego told USA Today about Ball, who is turning the once lackluster Hornets into one of the most exciting teams to watch.

“I think a lot of his early-season success and his play were built off just straight instinct just how he plays as a basketball player,” Borrego said. “But now, he’s starting to think the game, think about time, situation, who needs a touch, who needs a call and he’s starting to become more of a manager of the game than just a player of the game. That’s really been big for us and that’s probably going to be the biggest step you see the rest of the way this season.”

Borrego and the Hornets are not the ones who have noticed Melo’s star potential. Other players and coaches are noticing it as well.

“Man, he’s good,” Jazz All-Star guard Donovan Mitchell told the AP. “I’m not going to lie, I’m very impressed with his playmaking ability, his competitiveness, but his joy. … He’s very talented; he can do many different things.”

Mavericks coach Rick Carlisle thinks the NBA rookie of the year race is over.

“Right now, with the way things look, [LaMelo] looks like NBA rookie of the year to me,” Carlisle said. “He’s getting it done statistically, their team is winning. He’s got energy, he’s got a vibe, he’s got swagger. If you like watching players that play with flair, he’s right up there.”