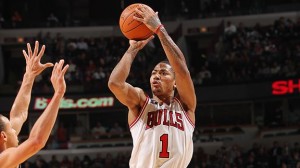 Horace Grant remains an avid NBA fan and follows the Chicago Bulls, Orlando Magic and Los Angeles Lakers, basically the teams he played for during his career, on NBA League Pass. During a recently Bulls-Hawks game in Chicago, Grant took the opportunity to provide some analysis . . . a tad biased but a commentary nonetheless.

Grant visited the United Center to check out the 2011 version of the Chicago Bulls, and he came away very impressed.

“Let me tell you something about this Bulls team, the sky is the limit for this ballclub,” said Grant, the starting power forward on the Bulls teams that won titles in 1991, 1992 and 1993.

“With a leader like Derrick Rose and guys coming off the bench, and the way they play defense, it kinda reminds me of that 1990-91 basketball team,” Grant said. “They’ve gone through some growing pains and it might be their time to shine.”

On the 20-year anniversary of the first Bulls’ NBA championship, a team that featured the great Michael Jordan and Scottie Pippen and coached by Phil Jackson, the 2011 Bulls are in a great position to reach the NBA Finals.

The common denominator in the 1991 Bulls and the 2011 Bulls is defense. First-year head coach Tom Thibodeau has implemented a Boston Celtics-style of approach on the defensive end of the court as his group is yielding just 91 points per game – the best in the NBA.

“The way they play defense, their tenacity, their work ethic, and the bench,” Grant said of the similarities between his team and this year’s Bulls.

Though the 2011 Bulls boast a very deep and gritty roster led by Rose and Joakim Noah, they are nothing like the 1991 Bulls. Sorry, Horace, but you are absolutely dead wrong on this one.

Let’s break it down.

At center, Noah is very good but he’s still undersized especially when he goes up against the likes of Dwight Howard, Andrew Bynum and Pau Gasol. The 1991 Bulls had Bill Cartwright, who may not have Noah’s athletic ability but he was a fantastic post defender and he anchored Chicago’s stifling D by keeping opposing centers from getting to their sweet spots.

At power forward, Boozer is slightly better on offense than Grant but, at 6-foot-8, is another undersized player who struggles against longer players (remember the Jazz-Lakers series last season). Grant excelled at facing the basket and had a reliable 15-footer. Because Grant doesn’t clog the lane like Boozer, it allows for more dribble penetration.

At small forward, Luol Deng is an effective starter in the Association but compared to Pippen, who is one of the greatest to ever play the game, he’s overmatched. Pippen was the point man of Jackson’s triangle offense, and he’s arguable the best perimeter defender in league history (yes, better than Jordan).

Speaking of Jordan, at shooting guard . . . let’s not even bring this up since it’s a no-brainer. Jordan vs. anyone is a mismatch. This position is the greatest weakness of the 2011 Bulls. They don’t have anyone who can provide a consistent threat on offense, and whoever starts – whether it’s Keith Bogans or Ronnie Brewer – is a liability.

Point guard is the only advantage the 2011 Bulls over the 1991 Bulls. Rose is a budding superstar and he vastly superior than John Paxson. In fairness to Pax, he wasn’t asked to do a lot of scoring for the 1991 Bulls because Jordan and Pippen dominated the ball. What Paxson did was make clutch shots (remember Game 5 of the 1991 Finals vs. the Lakers, and Game 6 of the 1993 Finals vs. the Suns).

As for the bench comparison? It’s close, but the 1991 Bulls had starter-like talent coming their bench, while this year’s Bulls have a bunch of “nice” players but consistency is an issue.

“Without our bench, we would not have won three championships,” Grant said. “You have to give Stacey and the guys off the bench, giving us that big lift that we need.”

The Stacey Grant was referring to is Stacey King, a 6-foot-10 forward who provided a low-post scorer and post presence off the bench during Chicago’s first three-peat. Other key contributors were guards B.J. Armstrong and Bob Hansen, forward Cliff Levingston and center Scott Williams. That foursome is certainly better options than Brewer, Kyle Korver, Kurt Thomas and Omer Asik.

Grant is being extremely generous with his bouquet of praise for this year’s Bulls squad and the 1991 Bulls, but let’s not insult the greatness of the first Bulls’ championship team.