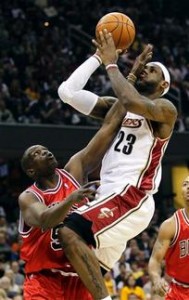 The Cavaliers are moving on to the Eastern Conference semifinals but the mysterious injury to LeBron James’ right elbow, something he compared to hurting your funny bone, is no laughing matter with Cavaliers Nation.

James claims that he’s had the injury for quite some time, but he doesn’t know how or when he hurt it. Though James says the injury is not a huge concern, it was bothersome enough that he shot his last free throw in the closing moments of Game 5 against the Chicago Bulls with his left hand. And he missed badly.

If the pain was so severe then how come James was able to swish the first free throw to give the Cavs a 96-92 lead? James later told reporters that he would have shot the second free throw right-handed had it been a one-possession game. Talk about cutting it too close, LeBron. I know you hurt your funny bone, but pulling a stunt like that in the playoffs is not funny.

“I honestly don’t know what’s going on,” James said after Game 5. “I mean, I’ve done tests trying to figure this thing out. It almost feels like when you hit your funny bone and it kinda numb up for a little bit.

“I don’t know exactly when it happened…can’t figure it out. It’s been going on for a few weeks and hopefully it doesn’t continue to bother me as we continue to move on in the postseason.”

Is LeBron James being overly dramatic? Probably. He said he has been dealing with it for weeks and played through it for an entire quarter against the Bulls and seemed OK. Will he be able to adjust his game? Absolutely. It might even improve his shot selection and force him to stop taking ill-advised threes. Will he use the injury as an excuse should the Cavs somehow fail to win a title? That’s a question The King is hoping he doesn’t have to answer.

James disclosed that he recently had an MRI done on his elbow and X-rays didn’t reveal any structural damage.

James’ message to Cavs Nation: “Cleveland fans have nothing to be worried about. I’m healthy, I’m ready and we look forward to the second round. They have no reason to panic.”