All-Star guard Chris Paul remains in New Orleans for now, but he'll likely be wearing a different uniform this season. (US PRESSWIRE)

LeBron James opened a new can of worms last summer with his controversial “Decision.”

Chris Paul and Dwight Howard are now following James’ villainous lead, holding their teams hostage by refusing to sign long-term deals with their current teams. Paul is on his way to the Los Angeles Clippers after the Hornets were unable to convinced him to sign an extension. The Orlando Magic are on the brink of losing Howard, who recently told Orlando management that he wants to be traded.

If these storylines look and sound familiar it’s the same predicament the Cleveland Cavaliers and the Denver Nuggets found themselves in 2010 when LeBron held the Cavaliers hostage before signing with the Miami Heat, and months later Carmelo Anthony practically followed LeBron’s lead by putting the Nuggets on pause until he found a new home with the New York Knicks.

This player power play is the very reason why NBA owners wanted to change the system. Small-market teams don’t want another LeBron or Carmelo situation in which they were left empty-handed and nothing to showcase for their fans. Teams want a headliner to fill seats. The Hornets will feel the sting of losing Paul, considered one of the top points guards in the league and a four-time NBA All-Star. Even though the Hornets got some nice pieces in the trade – Eric Gordon, Al-Farouq Aminu, Chris Kaman and a first-round pick – you don’t give up a Chris Paul and get equal value. The same goes for the Magic. Should Howard leave Orlando, how are the Magic going to satisfy their season-ticket holders at new Amway Center without the best center in the game today? These are legitimate concerns by the owners, but their hands seem to be tied because today’s stars seem determined to dictate where they want to go.

“First and foremost, we want Dwight to re-sign here,” Magic president Alex Martins said. “We’re going to continue to give him every resource, every asset that he needs and that we need to be successful. I think we’re proven that over the course of the last four years in particular, but certainly his entire time here. Only two other teams in the league have won more than we have over the last four years.” 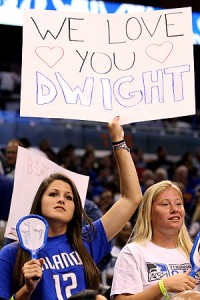 An Orlando Magic fan shows her support for Dwight Howard during the third quarter of game five of the 2011 NBA playoffs at Amway Center. (US PRESSWIRE)

Howard publicly criticized the Magic recently for not doing enough to meet his demands. His wise list, of course, includes big-market, sexy teams like the Lakers (so he could join forces with Kobe Bryant), the Mavericks (so he could play with Dirk Nowitzki), and the Nets (so he could play with Deron Williams). The Magic went through this before with Shaquille O’Neal in 1996, and it took the franchise nearly a decade before they were able to recover from Shaq’s departure.

It’s a little baffling that current star players are hell-bent on joining other stars. It is definitely a complete turn from the 1980s and ’90s when megastars such as Magic Johnson, Larry Bird, and Michael Jordan would never dream of playing elsewhere. What ever happened to competitive ego? Twenty years ago, superstars preferred to build their own niche and won championships as the centerpiece. Now, it seems today’s stars are more than willing to share the limelight with other all-stars.

“Gone are the days when teams are built around [star players] and they end their careers there,” said former Toronto Raptors coach Sam Mitchell. “These players today are about quick gratification. They see guys moving around and they see guys having success [elsewhere]. So what you have to do is make the best deal you can. Try to make a deal, get young players , draft picks, be bad for a couple of years and suck it up.”

Paul says he wanted out of New Orleans because he didn’t think he had a chance to win a title with the Hornets. Howard’s Magic career so far has been defined by his numerous failures in the playoffs and the big man is becoming impatient with each passing season. However, not everybody can play in L.A. or New York. Someone has to play in these small markets.

Message to Dwight: Suck it up and try to win in Orlando instead of riding someone’s tail.