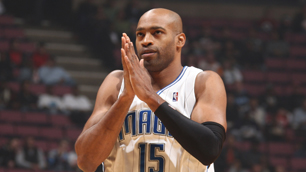 Vince Carter scored 16 points in his return to New Jersey but left the game with an ankle injury. (GETTY IMAGES)

With the theme song of the evil Republic playing in the background, Vince Carter was introduced to New Jersey Nets fans in East Rutherford, N.J., on Friday night, but this time as a member of the Orlando Magic.

For the most part, the crowd was appreciative and there were more cheers than boos. The cheers got even louder when Carter drove to the basket and slammed one home early in the first quarter.

But in typical Vince Carter fashion, the promising night turned into disappointment as Carter went down with ankle injury in the second quarter and never returned.

Carter, who has been referred to as Wince Carter for being so injury-prone and overly dramatic whenever he falls on the hardwood, scored 16 points before leaving the game against his former teammates. Dwight Howard more than made up for his absence with 20 points, 22 rebounds and four blocks to lead Orlando to a 95-85 victory.

“I heal like a young guy so I’ll be good tomorrow,” Carter told the Associated Press after sitting out the second half. “Hopefully, I’ll be back Sunday. We’re going to be smart about it. It’s a long season. I’m feeling better now that I am walking on it.”

Carter spent the second half in the trainers’ room and had his ankle wrapped. X-rays were negative.

His night ended with 3:05 left in the first half. Dribbling around the top of the key, Carter stepped on Harris’ foot and immediately fell to the court, clutching his ankle.

Carter needed about a minute before getting up and going to the bench. He stayed there for about a minute and went to the locker room for the rest of the game.