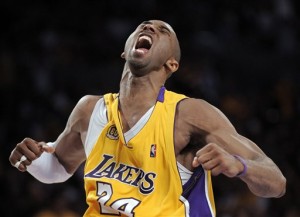 The only thing standing in the way of Kobe Bryant and winning a fifth NBA championship is the Boston Celtics. (ASSOCIATED PRESS)

Kobe Bryant wanted to win another NBA title so bad it nearly cost him.

Despite shooting a pathetic 6-for-26 in Game 7 of the 2010 NBA Finals against the Boston Celtics, Bryant was awarded the Finals MVP trophy as he celebrated his fifth NBA championship.

Is Bryant the greatest Laker of all time? That’s the unavoidable question that everyone seems to be throwing around now that Bryant has just as many championship rings as basketball Hall-of-Famers and Laker legends Magic Johnson and Kareem Abdul-Jabbar, and four more than his idol Jerry West.

Few can argue Johnson’s status as GLE (Greatest Laker Ever). He owns five championship rings, six MVPs (three in the NBA Finals) and made arguably the greatest shot in Lakers history when he swished the junior skyhook against the Celtics in Game 4 of the 1987 Finals.

And, oh by the way, his bronze statue stands on Star Plaza at Staples Center.

Wilt Chamberlain, Shaquille O’Neal and Abdul-Jabbar are three of the best players in NBA history, but because they played for other teams longtime Laker fans – as well as Dr. Buss – consider them as hired guns.

For whatever reason, Kareem has always taken a backseat to Magic. Just look at their positions in the current Lakers hierarchy. Magic is part owner while Kareem is a special assistant. Fair? Probably not. Dr. Buss has always favored Magic over Kareem. Same goes with West over Wilt and Kobe over Shaq.

West and Johnson played their entire careers with the Lakers, and Bryant has a no-trade clause in his big, fat contract so he should finish his career wearing purple and gold.

West has told everyone who would listen that Bryant is, without a doubt, the best player to ever wear the Laker uniform. Kobe is the franchise’s all-time leading scorer, the 2008 regular-season MVP, a two-time Finals MVP and a five-time world champion.

However, there is a dark side to Bryant that has kept him from becoming Mr. Laker. Often times, Bryant can be very pugnacious toward the media, which really hurts his Q rating.

Bryant is a polarizing figure. He is both loved and hated. He may go down in history as the most talented Laker of all time, but his off-the-court persona and his 2004 rape charge still haunt him.

If Bryant had Magic’s personality, he would easily be the most beloved celebrity in Southern California. Right now, he’s stuck somewhere between Vic “The Brick” Jacobs and Kim Kardashian in the likeability rating.

But all of this may soon change now that Bryant has filled one hand with championship rings, and has a very good shot at surpassing Michael Jordan – who many consider as the G.O.A.T. (Greatest Of All Time). It’s all about the rings, and Kobe is far from done.

When Bryant was asked if he needed to defeat the Celtics in order to be considered the greatest Laker of all time, Kobe said “no” at first but then came clean after the Lakers’ 83-79 victory in Game 7.

“I was just lying to you guys,” Bryant admitted. “When you’re in the moment you have to suppress them. Because if you get caught up in the hype of it all you don’t really play your best basketball. But I mean you guys know what a student I am. I know every series that the Lakers have played in. I’m a Laker nut. I know every Celtic series, I know every statistic so it meant the world to me. But I couldn’t focus on that. I had to focus on playing.”

He added, “It was the most physical one. They believed they could beat us, especially after what happened in ’08. Guys made big shots. It was tough. They weren’t going to beat themselves.”

Of course beating the Celtics meant the world to Bryant. This is a guy who can recite the NBA record book in his sleep and works himself to exhaustion to maintain his status as the No. 1 player in the world.

“It’s not in the front of his mind. It’s about his personality. It’s about winning,” Lakers coach Phil Jackson said of Bryant’s alleged quest to surpass Magic Johnson or Michael Jordan. “I think in retrospect he’s going to see that at some point.”

When longtime L.A. sportscaster Jim Hill asked Bryant what a fifth ring meant to him personally, Bryant took a shot at a former teammate and a current rival. “I just got one more than Shaq. So you can take that to the bank,” Bryant said with a big smile on his face. “You know how I am. I don’t forget anything.”

A lot of times, Bryant’s comments drip with sarcasm. But his verbal shot at O’Neal was calculated and serious. It was a direct response to O’Neal’s disparaging remarks through a rap song two years ago after Bryant’s Lakers lost in the ’08 Finals. Like Bryant told the media, he never forgets anything – and he means it. Kobe had more chips on his shoulders than Phil Hellmuth.

Jackson said when he first became the Lakers coach, he received a call from West, the Lakers’ vice president and player personnel director at the time, and West told him that Bryant wished to bump up his scoring average close to 30 points – just like West and Elgin Baylor did for much of their Laker careers – but knew it would be difficult because O’Neal was the focal point of the offense.

“At that time of his career at 21, which was the age Kobe was at that time, he was very concerned about his mortality and how history is going to look at him as a basketball player,” Jackson said. “This time, I don’t think it’s in the back of his mind that he has to catch Magic or he has to catch Michael. He wants to win.”

If Bryant wins a sixth NBA title, it should not only vault him over Magic as the greatest Laker of all time but it should propel him into the Jordan conversation.