Golden State head coach Don Nelson recently suspended forward Stephen Jackson for conduct detrimental to the team after the “stunt” he pulled during a preseason game against the Los Angeles Lakers.

Jackson, who has gone public with his trade demands and has not been discreet about his displeasure with the direction the Warriors are heading, committed five personal fouls and was hit with a technical foul in less than 10 minutes. Jackson voiced his anger at the coaching staff when he was taken out of the game at the 2:50 mark of the quarter. Nelson eventually sent him to the locker room to cool off. Jackson never returned.

This is just the latest in a long line of very poor conduct demonstrated by Jackson. The nine-year vet has a rap sheet that would make T.I. jealous. 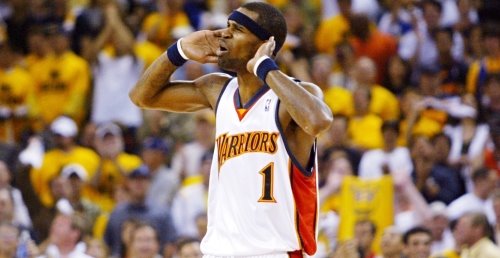 Stephen Jackson wants to get traded, but the Warriors are not budging.

In 2004, Commissioner David Stern suspended Jackson for 30 games for his involvement in the Palace Brawl that saw him go up in the stands and threw punches at fans. In 2006, there was a published report that Jackson and three other Indiana Pacers teammates were involved in a heated argument with patrons at Club Rio in Indianapolis. Jackson was punched by one of the patrons and was hit by a car, rolling onto the hood. His injuries were considered minor. Jackson says he fired several gunshots from a 9-mm pistol as an act of self-defense. However, prosecutors later said he fired first. He was charged with a felony count of criminal recklessness. He served a seven game suspension at the beginning of the 2007-08 season.

Jackson said he was upset because the coaches left him in the game despite his foul trouble, and he felt they didn’t stick up for him with the replacement referees.

“I felt like I didn’t get handled right in the game,” Jackson told the San Jose Mercury News. “I know I did what I’m supposed to do, being a man. I’m not going to let Kobe throw elbows at me.

“(Things are) always made out to make me look bad. At the end of the day, I wouldn’t disrespect Coach like that. But I was mad at our staff for not having my back. If I’m going to go out there and bust my (butt) for you, I expect you to have my back.”

Jackson reiterated that all of his frustrations stem from his desire to win and his hope that the organization wants to win as much as he does.

“My whole thing is I want to win,” Jackson said. “They should be able to respect that. I want to win. That’s just me. I’m still going to go out there and play hard and do what I do. But I want to win.”

Rumors are swirling that Jackson prefers a trade that would send him to the Cleveland Cavaliers. The question is, do the Cavaliers want a loose cannon on the team?