If you decode Phil Jackson’s recent comments after Game 2 of the Lakers’ first-round series against Oklahoma City, you get the sense that there is a certain discord between the Lakers coach and superstar Kobe Bryant.

When reporters asked Jackson if Bryant’s shooting performance – 12-for-28 in Game 2 and finished with 39 points – had anything to do with his father, Joe “Jellybean” Bryant, watching courtside at Staples Center to see  his son play in person for the first time in five years.

“I hope not,” Jackson replied. “I hope that [Kobe] just played the regular game he plays. I’m sure it was great to see his dad, but it might be nicer to see him off the court than on the court. I don’t know. It was awful close to the bench, but he seemed to handle it well.”

When the topic of Joe Bryant becoming a fixture at future Lakers games, Jackson said: “He’s not on our plane. I know that.”

It was quite obvious that Kobe was extra fired up for Game 2 because his father was in attendance, and Jackson is concerned that Jellybean’s presence could become a major issue if Kobe’s “I’ve-got-to-get-mine” habit gets into the way of Jackson’s team-first approach. 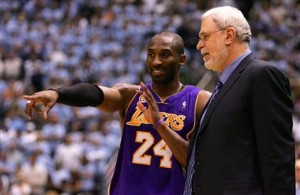 Part of the reason why the Lakers are struggling offensively against the Thunder is their lack of balance and ball movement, which usually means Kobe is flying solo too much.

Bryant took 14 more shots than Pau Gasol, who had a far more efficient game. Gasol converted eight of 14 shots from the field and finished with 25 points and 12 rebounds.

In the past, Bryant’s tendency to freelance and dominate the ball has drawn the ire of Jackson and former teammate Shaquille O’Neal. Many of Bryant’s and O’Neal’s disagreements spilled over to the media and Jackson was criticized for allowing L.A.’s family feud to escalate into World War III and blasted Kobe in his 2004 book “The Last Dance.”

Jackson and Bryant seem to have set aside their differences when Jackson returned to coach the Lakers in 2005. Their relationship greatly improved and even turned harmonious when the Lakers won the NBA title last season – the fourth for Jackson and Bryant as co-leaders but the first for Kobe as the lead act.

But this season, the lovefest appears to be over (again!) and the two have bumped heads on more than one occassion.

When Bryant’s knees and fingers were getting worse and worse, Jackson wanted to sit his star player but was overruled until Bryant himself felt the need to rest his injuries.

Then, in a nationally televised game at home against the Portland Trail Blazers, Bryant took a shot at Jackson’s interesting play call on the Lakers’ final possession when the team was down by three points. Jackson wanted Derek Fisher as the first option and Gasol was the second. Gasol ended up with the ball at the top of the 3-point circle and missed.

On the play, Bryant – who has hit six game-winning shots this season – served as a decoy, which didn’t sit well with him. “When was the last time you saw me set a damn down screen,” he told reporters after the game.

Having Joe Bryant around is a distraction Jackson is not willing to deal with, and his relationship with Kobe could get ugly if the coach continues to tell Jellybean to stay away from the team through the media.

When there is smoke, there is fire. It appears this season could be Jackson’s last dance with the Lakers – again.