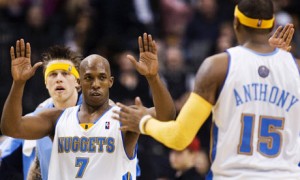 Los Angeles Lakers Coach Phil Jackson made the first move in the Western Conference finals and now it is up to the Denver Nuggets to adjust. Jackson put Kobe Bryant, his best defender, on Nuggets point guard Chauncey Billups for much of Game 1. Even though Billups scored 18 points, he made just 38% of his field goals (5 of 13) and was just 2 of 7 from 3-point range in Denver’s 105-103 loss at Staples Center.

Entering the conference finals, Billups was shooting 54% from the field and making almost half of his 3-point shots (14 of 32). Jackson – who is 42-0 when he wins the first game of a playoff series – was definitely concerned about Billups before the series began. By putting Bryant on him early, the Lakers coach made it very clear that slowing down Billups is the key to winning the series. Jackson made a similar move during the 1998 playoffs when he assigned forward Scottie Pippen to smother Indiana Pacers point guard Mark Jackson in the beginning of that series.

Jackson was bitten by Billups before – he led the Detroit Pistons past the Lakers in the 2004 NBA Finals and was MVP of the Finals – and the Zen Master was not about to let that happen again. By making Billups work for every shot, Jackson is trying to kill the head of the snake. The Lakers are willing to live with Carmelo Anthony getting 39 points. But Bryant, along with Trevor Ariza and Shannon Brown, will not allow Billups to get comfortable.

Billups played in six consecutive Eastern Conference finals as a member of the Detroit Pistons. When Detroit traded Billups to Denver, the Pistons went south and failed to reach the second round. In fact, the Pistons failed to win a game against the Cleveland Cavaliers.

Billups has stabilized Denver’s once undisciplined offense and has somehow taught the Nuggets how to play defense, which was like teaching a pitbull how to cuddle. Much like a veteran quarterback who does not throw interceptions, Billups rarely makes mistakes on offense and defense.

By taking away Billups, the Lakers are banking on the fact that the Nuggets, a team they swept out of the playoffs a year ago, will revert back to their old ways.