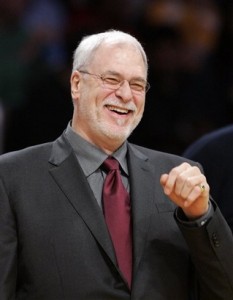 Phil Jackson loves to play mind games with the opposition.

The first jab of the 2010 Western Conference finals was thrown by Lakers coach Phil Jackson when he said Steve Nash, Phoenix’s All-Star point guard, is tough to guard when he is allowed to carry the ball.

When asked what a chore it would be for his team to contain Nash and simulate what he does in practice, Jackson joked with reporters and said, “Yeah, because you can’t carry the ball like he does in practice. You can’t put that ball up and run with it.

Jackson is well known for this kind of gamesmanship. He made a similar remark prior to the start of the Lakers’ first-round series against Oklahoma City when he highlighted that Kevin Durant gets a lot of favorable calls from officials.

The little verbal potshot may have worked on the 21-year-old Durant, who was visibly upset by Jackson’s claim, but the 36-year-old Nash has been in way too many of these playoff battles to be suckered into a war of words. And he certainly knows how to handle the Zen Master’s mind games.

“I mean the best coach in the league, Gregg Popovich, didn’t have a problem with it last week,” said Nash. 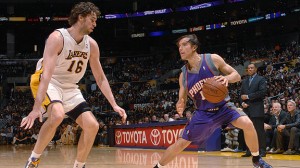 Pau Gasol and the Lakers will have their hands full against the crafty Steve Nash.

Though both teams have a lot of respect from one another, there is a little bitterness in terms of recent playoff history between the two Pacific Division rivals. This is the third playoff meeting between Phoenix and L.A. since 2006, and the Lakers have a score to settle with the Suns since they were the last Western Conference team to knock out the defending NBA champs.

The Suns are coming off an impressive four-game sweep of the San Antonio Spurs, while the Lakers recently beat up the Utah Jazz in four convincing games.

Nash and Amare Stoudemire are playing at a high level in the playoffs, but so are Pau Gasol and Kobe Bryant.

“They’re a great combo. Their two-man, screen-roll situations are phenomenal. We think that we have a good combination in Pau and Kobe, and we’re going to try and match that,” said Jackson.

During the regular season, the Lakers defeated the Suns three out of four times and had a seven-point average margin of victory. The Suns bench, which was key in the Spurs’ series, played a big part in Phoenix’s lone victory over the Lakers on Dec. 28. The Suns bench outscored the Lakers bench, 52-31, and 44 of them came from Jared Dudley (19), Goran Dragic (14) and Leandro Barbosa (11). One footnote from that game was that Ron Artest, the Lakers’ best defender, did not play because of a concussion.

Artest will likely guard Suns shooting Jason Richardson, who struggled mightily against the Lakers this season. He averaged just 8.7 points in four games and made just three of 21 3-point shots.

The Suns will need their bench, as well as Channing Frye, to play at a high level against the Lakers because depth is the only real advantage for the Suns in this series.