Jameer Nelson is on a mission. His poor performance in the 2009 NBA Finals against the L.A. Lakers has fueled his desire to get back to the Finals and atone for his disappointment.

In fairness to Nelson, he wasn’t healthy during the Finals and it showed. He failed to cover Derek Fisher late in Game 4 and it cost the Magic the series. Fisher hit a game-tying 3-pointer in regulation and hit another big 3-pointer in overtime to give the Lakers a 3-1 lead in the series. L.A. went on to win the championship in five games.

That memory has haunted Magic’s All-Star guard throughout the offseason and he probably won’t stop thinking about it until he gets back to the Finals and lead the Magic to the championship.

First on Nelson’s agenda is the Charlotte Bobcats.

Through the first three games of the series, all Orlando victories, Nelson has completely dominated his matchup against Charlotte’s Raymond Felton and the 5-foot-10 Magic point guard has been without a doubt the best player on the court. 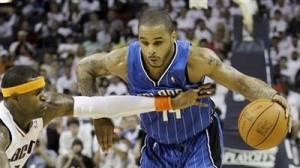 “Jameer dominated the game, again,” Bobcats coach Larry Brown said. “The 19 points in the first quarter was special. But I thought the last eight minutes of the game he got everybody a shot. He got the ball anywhere he wanted, and took what was there. He was phenomenal.”

Nelson, who has Mighty Mouse tattoed on his arm, matched his playoff career high of 32 points in Game 3 and put the Magic on his little back when All-Star center Dwight Howard fouled out with under four minutes to play.

“I’m gonna keep it real, they’re beating us – on both ends,” said a frustrated Bobcats forward Stephen Jackson. “They’re playing great defense and they’re hitting shots. Their point guard is making plays for those guys. I mean even though Jameer is not scoring every time, he’s getting guys wide open shots and they’re knocking them down.”

“The little guy, he led us tonight. He did an excellent job in shooting the ball, passing the ball and playing defense. That’s what won us the game,” said Howard, who played just 26 minutes in Game 3 because of foul trouble.

But have no fear Magic fans, Mighty Mouse has Superman’s back.

Video is courtesy of NBA.com