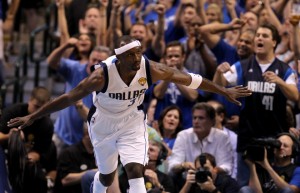 TNT’s Kenny “The Jet” Smith has said on more than one occasion that Jason Terry got his “Jet” nickname not because of his game, but because it stood for his full name: Jason Eugene Terry.

After Terry’s performance in the 2011 NBA Finals, Smith may have to revisit his little jab at the Mavericks guard. And Terry may have picked up a new nickname as well: The Closer.

When Mavericks franchise player Dirk Nowitzki struggled in the early part of Game 6 in Miami, it was Terry who shouldered the load with 19 points in the first half. Once Nowitzki regained his shooting touch, the Mavericks took off and shot their way to a 105-95 victory to claim the Larry O’Brien Trophy.

It was Dallas’ first championship as an NBA franchise, and although Nowitzki was named MVP of The Finals, it was Terry who complemented Dirk and took some pressure off him when it mattered most – the fourth quarter.

Nowitzki was absolutely magnificent down the stretch in each of the games. He scored 62 points in the fourth quarter in the six games, tying the combined total for Dwyane Wade (44) and LeBron James (18). But right behind Wade in fourth-quarter scoring is Terry with 31.

“He was unbelievable,” Nowitzki said of Terry, who finished with a game-high 27 points in the series-clinching Game 6. “He watched me struggle early and he took it upon himself to really attack and look for his shot, and get going early. Oh man, he kept coming all night long and he was phenomenal.”

Nowitzki added, “On one timeout, he kept pushing me and kept telling me, ‘Remember ’06! Let’s not let it happen again.’ ”

There was a stretch in the final two minutes of the game in which Terry carried the Mavs. When the Mavs went down 100-97, Terry buried a 3-pointer to tie the game at 100. On the next Mavs possession, he found Nowitzki on the baseline for a dunk to give Dallas the lead. Then, with 1:33 remaining, he drove to the basket, blew past LeBron, drew three defenders and kicked the ball out to Jason Kidd for a 3-pointer to build the lead to five. He delivered the dagger shot when he drilled a three from the American Airlines Center logo right in the face of LeBron to give Dallas a 108-101 lead with 33 seconds left in the game.

“During periods where Dirk was out of the game, we were going to him and he was delivering,” Mavericks coach Rick Carlisle said of Terry after Game 5. “It’s the total game that we’ve all been preaching to Jet really since the playoffs began.”

When the season began, Terry inked a tattoo of the Larry O’Brien Trophy on his right bicep. It was bold and very brash move for someone who has only been to the NBA Finals once in his career. When Terry was asked what he would do if the Mavs don’t win the NBA title, he said he’d remove the tattoo. Fortunately for Terry and the Mavs, that won’t be necessary.