What? Say that again.

The reality of the Utah-L.A. series is this, the Lakers are very familiar with the Jazz and they will use the same formula that has worked for them the past two seasons: use their superior size, strength and length to control the paint.

“We’ll be ready,” Bryant said of the matchup in the Western Conference semifinals. “No scouting report necessary, for either team. We know their offense inside out and they know our offense inside out, as well as the defense. We play each other so many times, including preseason, we’re just extremely, extremely familiar with each other.”

“Everybody knows we have trouble with the Lakers,” said Jazz coach Jerry Sloan, whose team has been eliminated from the postseason by the Lakers the past two years.

“They’re big and long and we’re not big and long. When it’s all said and done, you come and play and do the best you can,” Sloan added. “Our guys will lay it out there and compete, and that’s all you can ask them to do.” 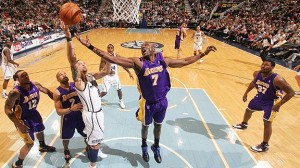 Utah lost the season series 3-1, and one of the Laker victories came without Bryant.

In the four meetings, the Lakers held the Jazz to 88 points per game, 43% shooting from the field (27% from 3-point range) and L.A. enjoyed a +4 rebounding edge. Against the rest of the league, Utah averaged 104 points per game and nearly 50% shooting.

Boozer, who dominated the Nuggets’ big men in the first round, enjoyed a season in which he averaged 19 points and 11 rebounds. But against the Lakers, Boozer’s numbers are down (16 points and nine rebounds). Boozer gives up almost three inches against Bynum and Gasol, which limits his post-ups.

“Third time is a charm, right?” said Jazz guard Deron Williams, who is a game time decision for Game 1 because of a sore elbow. “It’ll be a tough series. They’re always tough. They’re the defending champs until somebody defeats them. Hopefully we can be a little tougher with them, be a little more physical. They are usually a team that tries to come out and blow you out in one quarter and they’ve done that to us on several occasions. We’ll just have to be ready to go.”

So, unless the Jazz sprout some more height the next few days, it will be extremely difficult for them to combat the size and length of the Lakers. A sweep is not out of the possibility. More likely, the Jazz might be able to squeeze one win out of this series but that’s about it. Expect the Lakers to be in the conference finals.