Despite being manhandled by the bigger and more talented L.A. Lakers in the Western Conference semifinals, the Utah Jazz remain undeterred.

But, is Utah’s absolute best good enough to win? That’s the question head coach Jerry Sloan and his never-say-die Jazz face when the series switches to Salt Lake City for the next two games.

“I’m proud of the fact that our guys fought back in the ballgame,” Sloan told reporters after Game 2. “I thought we had a chance if we stayed after it, and when we did have a chance they blocked three shots as we came down the stretch and then Kobe made that big three with the ball out of bounds with seven seconds on the clock. I thought that did us in.”

The Lakers are ahead 2-0 in the best-of-seven series mainly because Utah has yet to find a way to neutralize L.A. big men Andrew Bynum, Pau Gasol and Lamar Odom. Bynum, Gasol and Odom combined for 50 points, 44 rebounds and nine blocked shots in Game 2.

“Their rebounding…we couldn’t handle them,” Sloan said. “We still outrebounded them on the offensive end, but we couldn’t keep them from getting the ball on the defensive end.” 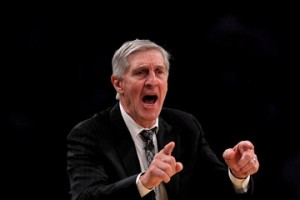 The Jazz also missed several easy shots in the paint, and Sloan said the Lakers’ length was the main culprit. “That’s their size. They block a lot of shots, especially when we come down the stretch. We just seem to be in a hurry.”

When the Laker big men are not controlling the paint, the Lakers turn to Kobe Bryant to dictate the action on the wing.

Whenever the Jazz made a push in the fourth quarter, which they have done in both games, Bryant has been able to carry the Lakers in crunch time with some timely baskets.

“That’s one thing about Kobe, he’s a terrific player, a terrific competitor and the shot that he made doesn’t surprise anybody. He’s tenacious and he’s a no-nonsense guy,” Sloan said of Bryant, who is averaging 30.5 points in this series.

Utah’s history against Phil Jackson’s teams is not good, dating back to Jackson’s days with the Bulls. The Zen Master is 45-0 when he wins the first game of a series and the Lakers have already won a regular-season game in Salt Lake, so the odds are definitely stacked against the Jazz.