Chicago Bulls forward-center Joakim Noah is not shy about his disdain for the city of Cleveland, and because of his recent comments he now has a big bullseye on his back.

All throughout Game 2 of the Cavaliers-Bulls first-round series, a game won by the Cavs 112-102, Noah was showered with boos and chants of “No-ah sucks! No-ah sucks!” from 20,000 Cavs fans at Quicken Loans Arena.

When given an opportunity to take back his “Cleveland sucks” comment, Noah added more fuel to the fire.

“You like it? You think Cleveland is cool? I mean I never heard anybody say ‘I’m going to Cleveland on vacation.’ What’s so good about Cleveland?” Noah asked reporters during the postgame news conference after Game 2.

As for the boos, Noah said it’s not the first time nor the last time he’ll hear it from the opposing team’s crowd.

“My whole life I’ve been booed,” said the 25-year-old emotional leader of the Bulls, who heard his share of disparaging noise when he played at the University of Florida. 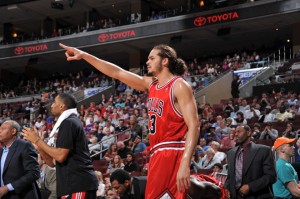 “In college, I was getting booed a lot,” said the two-time national champion. Today, the-guy-we-love-to-hate label has followed him in the NBA.

Noah, the son of former tennis star Yannick Noah, is not fazed by the negative attention. In fact, he seems to embrace it like a comic book villain.

He played a great game Monday night and was a big reason why the Bulls kept the game close until late in the fourth quarter when LeBron James took over and scored 14 of his game-high 40 points in the fourth. Noah finished the game with 25 points and grabbed a game-high 13 rebounds – seven of them on the offensive end.

“The biggest thing is they got extra possessions,” Cavaliers coach Mike Brown said. “You have to give Noah credit, he had seven offensive rebounds. I don’t think he had any in the last game.”

Because of Noah’s presence, the Bulls had 22 more shot attempts than the Cavs (93-71) and he outscored all three of Cleveland’s big men: Shaquille O’Neal (8), Anderson Varejao (7) and Zydrunas Ilgauskas (3).

“Joakim is a free spirit. He has great energy and he’s going to play hard all the time,” Bulls coach Vinny Del Negro said about his 6-11 power forward, who anchors the Bulls’ defense and should receive votes for Defensive Player of the Year.

Despite being down 0-2 in the series, Noah believes his Bulls will bounce back as they go back for two games on their home court at the United Center.

“I don’t think we’re discouraged right now. If anything, we’re motivated,” Noah said. “I think we can win, especially on our home court. We have some tough fans too. We’re looking forward to it. Just living in the moment, enjoying the competition, trying to win against one of the best teams in the world.”