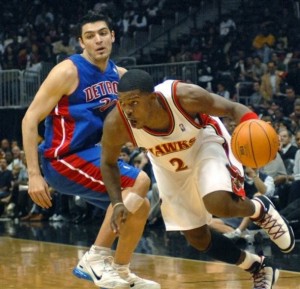 With just a few days left before the final All-Star Game rosters are set, Joe Johnson is getting shamefully snubbed. The Hawks’ shooting guard is 11th among East guards. He deserved to start in the All-Star Game on Feb. 15.

You cannot convince me that Joe Johnson is the 11th-best guard in the East. No way! Gilbert Arenas, who has not played a game this year, is sixth. Sixth! The only player I would consider over Johnson is Devin Harris. Since getting traded from Dallas to New Jersey, Harris’ game has exploded. His game is limitless. You think Mark Cuban would like a mulligan on that trade? Who would you rather have: Kidd or The Kid? Hmmm. I take the kid with arguably the quickest first step in the game.

Right now, the Eastern Conference starters are Dwight Howard at center, LeBron James and Kevin Garnett at forward, and Dwyane Wade and Allen Iverson at guard. Wade leads the NBA in scoring and leads all East guards with 1.4 million votes, and definitely deserves to start. However, I can easily find better options at the other starting guard spot than Iverson, who is not having an Iverson-type season.

As much as I love Harris, my vote goes to Johnson. I give Joe Johnson – the guy with an ordinary name but plays an extraordinary game – the slight edge over Harris only because his team has a better record. But Harris, who is fifth in the voting, deserves to make the East roster, no doubt.

Johnson is the unquestionable leader of the surging Hawks, who should end up with one of the top five playoff berths in the East. Johnson has the numbers (22 points per game and 6 assists) and the victories to back up his sensational season. During last season’s playoffs, the young and restless Hawks gave KG and the Celtics fits, and Johnson single-handedly extended that series to seven games. Basketball is relevant again in Hot-lanta and Joe Cool is a big reason why.

In the West, Yao Ming is once again No. 1 in voting among centers (Yao may be the starting center until he retires), Tim Duncan and Amare Stoudemire are the forwards, and Kobe Bryant and Chris Paul the guards.

For a while there Tracy McGrady was among the leaders at guard. T-Mac? Are you kidding  me? He has been a part-time player, at best, this season; yet, he has 100,000 more votes than CP3? Shame on the voters. McGrady is always hurt. He has already begged out of games and we are not even in February yet. There is always something with T-Mac – or, I should say, “SHE-MAC!”

When you look at his numbers this season, She-Mac is not even the second-best player on the Rockets. Heck, he may not be the third-best player on his team! What is the fascination with She-Mac? Why do fans keep voting for him? Are fans blinded by his past heroics? Is it because he’s Yao Ming’s teammate? Whatever the reasons are, they are not good enough to convince me that She-Mac is an all-star starter. He’s not the same player, folks.

I can easily name six other guards better than She-Mac. Chris Paul was the obvious choice, and kudos to the fans for getting it right. CP3 leads the league in assists and steals, and he’s one of just four players averaging 20-10 for the season (Al Jefferson, Zach Randolph and Tim Duncan are the others). Also deserving are Chauncey Billups, Tony Longoria-Parker, Brandon Roy, Deron Williams and Kevin Durant.

Billups is having an MVP-type season and should represent the Nuggets in Phoenix, not Melo. Since moving from Detroit to Denver, Mr. Big Shot looks rejuvinated. He has saved George Karl’s job and has found a way to get Nene more involved in the offense, something A.I. could not do.

Tony Longoria-Parker has become option 1-A for the San Antonio Spurs, averaging a career-high 21 points per game. He should make the West roster. Plus, having Eva Longoria at the All-Star Game is a must.

Roy is a superstar in the Pacific Northwest. The third-year guard out of the University of Washington has become the face of the Blazers franchise, which is still trying to recover from the mess left by J.R. Rider, Sheed, Damon Stoudamire and Bonzi Wells.

D-Will, slowed by a bad ankle injury earlier in the season, has kept the injury-riddled Jazz afloat. The Jazz are still without Carlos Boozer and Andre “AK47” Kirilenko has been shooting blanks. Durant plays for one of the worst teams in the NBA, but he’s still having a better season than She-Mac (Durant is one of nine players averaging more than 23 points a game).

OneManFastbreak.net picks the 12-man rosters for the East and West teams in the 58th NBA All-Star Game, to be held in Phoenix: