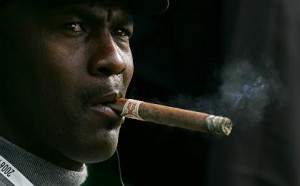 Michael Jordan says he wanted to beat Magic Johnson and Larry Bird, not join them. (AFP)

Michael Jordan understood why LeBron James decided to leave Cleveland and team up with Dwyane Wade and Chris Bosh in Miami. However, in hindsight, Jordan likely would not have done the same if given the same choice.

Call it an old-school mentality, call it ego, call it what you want. Jordan didn’t take shortcuts. What made him such a great player was his incredible drive and extremely competitive nature. He wanted to be the best and refused to play second fiddle to anyone. Sure, he got cozy with lot of his peers during his playing days, but when it came time to compete on the basketball court MJ wanted to destroy all of them.

So, when Jordan, who retired in 2003, was asked what he thought about James’ decision to join forces with his All-Star friends in Miami, the six-time NBA champion who built his entire legacy with the Chicago Bulls said he simply couldn’t see himself teaming with Magic Johnson and Larry Bird just so he could win a championship. He wanted to do it on his own, as the No. 1 alpha dog.

“I would have never called up Larry and called up Magic and say ‘Hey, let’s get together and play on one team.’ But things are different. I can’t say that’s a bad thing. That’s an opportunity those kids have today,” Jordan recently told NBC Sports in between rounds at the 2010 American Century Championship golf tournament in Lake Tahoe.

The idea of “if you can’t beat them, join them” approach was never an option for Jordan. Magic and Bird would never subscribe to that either. All three MVPs had too much pride to hitch on someone else’s championship wagon. It would have been real easy for Jordan to join either Magic’s team in L.A. or Bird’s team in Boston while he was chasing his first NBA title. But he didn’t.

Jordan suffered through miserable playoff defeats to the Celtics and the Detroit Pistons during the first six seasons of his career before finally getting over the hump in his seventh year when his Bulls defeated Magic’s Lakers in 1991.

The only exception to the rule was the 1992 Olympics when Jordan, Magic and Bird wore the same uniform for Team USA, and they were joined by fellow All-Stars Charles Barkley, Patrick Ewing, David Robinson, Karl Malone, John Stockton, Chris Mullin, Scottie Pippen and Clyde Drexler.

“When you look at the Dream Team, obviously, we were all on that team,” Jordan said. “But it wasn’t too much of a competitive thing.”

LeBron James says he keeps tabs of all the nay-sayers and will probably post some of them in his Heat locker for motivation. Though James holds Jordan in high regard, MJ’s latest comment could be bulletin-board material and the Charlotte Bobcats (Jordan’s team) could be in a heap of trouble.