LeBron James will likely collect his second regular-season MVP trophy in a few days, but according to TNT’s Kenny Smith, Kevin Durant will take away LeBron’s crown as the game’s best player three years from now.

“In three years, he’s going to be the best player in basketball,” Smith said of the 21-year-old All-Star, who became the youngest scoring champion in league history this season.

When Chris Webber heard Smith’s bold statement on TNT’s “Inside the NBA” show, he wanted to make sure everyone else on the set heard it and made Smith repeat it – twice.

“In three years, Kevin Durant will be the best player in basketball,” Smith said while looking into the camera.

Charles Barkley’s response? “LeBron James is rolling in his grave!”

“LeBron James is and will be the best basketball player in the world,” Barkley replied. 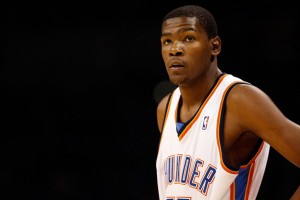 Smith didn’t back down from his earlier statement, but did say that LeBron is the best right now, but Durant is not far behind.

“LeBron is the better physical specimen for sure. Better skilled player right now for sure,” Smith noted. “But in three years, [Durant’s] improvement will surpass it because he will do other things in the game to help his team win.”

The “other things” that Durant did in Game 3 against the Lakers are what carried the Thunder to victory. His 8-for-24 shooting from the field could have easily discouraged him, but the young superstar found other ways to lead his team. Durant still finished with a game-high 29 points, and his defense and game-high 19 rebounds were crucial to helping  Oklahoma City score a 101-96 victory over the Lakers in Game 3. L.A. still leads the series, 2-1.

Oklahoma City outrebounded the bigger and taller Lakers, 53-39, and Durant’s one-on-one defense on Kobe Bryant contributed to Bryant’s 2-for-10 shooting in the fourth quarter.

“I probably guarded Kobe in the regular season about 10 or 11 possessions. Coach Ron Adams said ‘It’s your turn.’  I just try to play my hardest,” Durant told reporters during the postgame news conference. “[Kobe] missed some shots, some shots he normally hits. I just tried to use my length to disturb his shot. My teammates did a great job in helping me out. It was far from just being myself.”

To make up for his bad shooting night, Durant did most of his scoring from the free-throw line (making 12 of 13 free throws), including six in a row down the stretch to ice the game.

LeBron is only 25 years old, so in three years he’ll still be in the prime of his career. But Durant – nicknamed “Durantula” for his freakish long arms and legs – does two things better than LeBron right now: outside shooting and free-throw shooting.

James definitely has the better overall, and there is nobody in the league better at dribble drives and finishing at the rim. But if there is a flaw in The King’s game, it’s his jump shot. He still settles for too many off-balance 3-pointers, and he does not have much of a mid-range game. It’s a 3-pointer or a drive to the basket. Durant, on the other hand, can roll out of bed and knock down eight of 10 shots from 25 feet.

Will Durant be the best in three years? I think LeBron, Kobe, D-Wade, Dwight Howard, Carmelo Anthony, Tyreke Evans and Derrick Rose may have something to say about that.