Four Kentucky freshmen, including All-Americans John Wall and DeMarcus Cousins, recently announced that they were all entering their names in the NBA draft pool. Kansas freshman guard Xavier Henry also declared himself eligible for the draft, along with a host of other first-year players.

The one-and-done theme in college basketball is about as fashionable and trendy as smart phones and HD TV. Everybody wants to experience it despite the cost.

Kentucky head coach John Calipari is not a big fan of the recent rash of freshman bolting for the NBA, but he has learned to accept it.

“I had a ball coaching them. Now I’m gonna be honest with you, at times it was like coaching eighth-graders because we were so young,” said Calipari, who also lost freshmen Eric Bledsoe and Daniel Orton and junior Patrick Patterson to the draft.

“It’s kinda like being a father. You’re teaching, you’re working. You’re sad to see them go, but you’re proud of them. But I wish they were staying for two more years.”

Calipari knew Wall and Cousins were rent-a-players for the Wildcats’ program so he maximized their time at UK by putting them in prominent roles on offense and defense. It’s now the way of college basketball. Put the ball in the hands of young players and live with the consequences.

But is that good or bad for college basketball? Calipari is certainly not enamored with it. 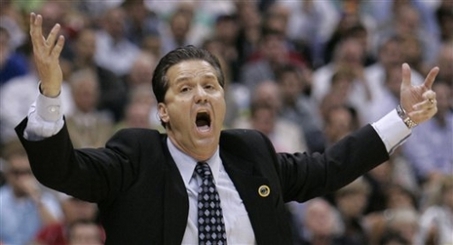 “Let me say this…I don’t agree with the rule,” said Calipari, who went through the same one-and-done drill with Derrick Rose in 2008 and Tyreke Evans in 2009. “I think kids should be able to go directly to the league if that’s what they choose to do. And if they go to college, they should stay two years or maybe three. The way it is right now is really hard.”

He added: “Our system of play, dribble drive and what we’re teaching, they can get it. When they get it, they can really play unleashed.”

Dick Vitale, ESPN’s longtime TV analyst and a member of the Naismith Basketball Hall of Fame, has more than once professed his disdain for this rule in which players cannot enter the draft unless they’re 19 years old.

This NBA rule has forced high school players, who had no intention of attending college, to enroll in four-year universities and stay there for a year before leaving for the NBA.

But Sonny Vaccaro, a sports marketing guru and the father of the summer league circuit, found a loop hole. He has encouraged high schoolers to head overseas and get paid for a year or two before trying their luck in the NBA draft.

Former prep star Brandon Jennings successfully executed Vaccaro’s plan as he signed a pro contract with Lottomatica Roma of the Italian League and, one year later, found himself back in the States. Jennings is now a Rookie of the Year candidate and instantly became the face of the Milwaukee Bucks.

But not all have enjoyed Jennings’ rags-to-riches success. Recently, San Diego prep player Jeremy Tyler left before his senior year in high school and signed with a professional team in Israel. Tyler reportedly left his pro team and his future seems clouded.

So far none of this year’s high school McDonald’s All-Americans have opted for Europe, but most likely more than half of them will opt for the NBA draft after the 2011 season.

Unless the rules change, this is the way of college basketball and coaches better learn to live with it.