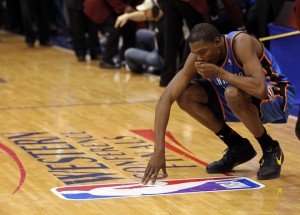 Oklahoma City star Kevin Durant looks dejected after his team was eliminated in Game 5 of the 2011 Western Conference finals by the Mavericks. (GETTY IMAGES)

For the first time in his young NBA career, Kevin Durant is sick to his stomach. Never before has the 22-year-old superstar been subjected to this kind of cruel fate.

Last season, Durant and the young and exciting Oklahoma City Thunder squad became an instant hit when they stretched the defending world champion L.A. Lakers to six games in the first round of the playoffs. With higher expectations this season, Durant and the Thunder went two steps further by reaching the 2011 Western Conference finals.

But this is where the fairytale ends, with the Dallas Mavericks serving as reality checkers. The Mavs eliminated the Thunder with a 100-96 victory in Game 5 in Dallas, taking the series 4-1 and advancing to the NBA Finals. OKC was game and resilient, but it was obvious the stinging loss from the previous game still lingered. And the way they executed (or how they didn’t execute) down the stretch in Game 5 reminded them of their epic meltdown in Game 4.

The overtime loss in Game 4 in Oklahoma City left a huge scar on Durant, something he’ll probably carry around all offseason until he gets another opportunity to play in the conference finals.

Even though the Thunder, as a team, blew a 15-point lead with five minutes to play in the fourth quarter of Game 4, Durant felt responsible because he knows the fate of the franchise begins and ends with him.

“I feel upset because I let [the Oklahoma City fans] down. Let the city down,” Durant said after getting outscored by Dallas, 28-6, in the final five minutes of regulation and in overtime that deflated not only the Thunder but their loyal supporters who thought they had locked up the series at 2 midway through the fourth quarter.

When someone brought up the “inexperience” issue during Durant’s postgame news conference, Durant scoffed at that notion and delivered a terse reply. “This is basketball, man. Our youth had nothing to do with what we do on the floor. We showed we can play at this level.”

Durant added, “I was trying to play with so much force, played so hard. Early on they were playing straight up defense. Later on, I see three, four guys around me. Late in the game, that was my time. But a few of those times the lane was too clogged up and I didn’t want to force a shot, so I passed the ball to my teammates. I believe in my teammates. I have trust in them.”

The end of regulation came down to Durant, who had the ball near midcourt with under 10 seconds left on the clock. Normally, he would calmly dribble to his left and pull up for his signature jump shot. But Shawn Marion blocked his path, and Jason Kidd was also playing free safety in case Marion gets beat. So Durant really had nowhere to go.

Sorry, KD. When you say “I didn’t know what else to do” is basically admitting that your inexperience played a part in your indecision. But that happens to all young stars. Durant will learn from this and be a better player because he failed. Based on how he attacks each offseason and always strives to be better each year, I predict KD won’t fail too many times when he’s placed in the same predicament in the future.