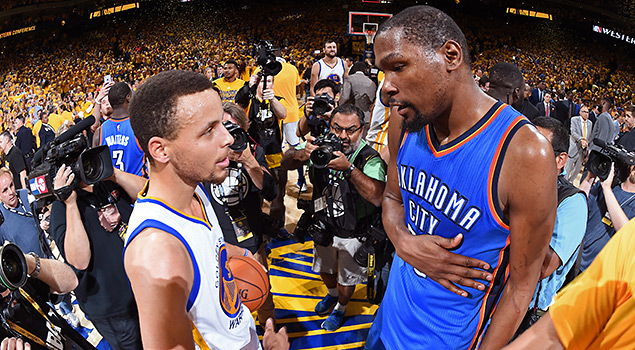 That was the prevailing thought in the basketball world when Kevin Durant, the 2014 NBA most valuable player and considered by many as the third-best player in the world behind Stephen Curry and LeBron James, announced on the Players’ Tribune that he was leaving the Oklahoma City Thunder and joining the Golden State Warriors.

Reaction to Durant’s decision was swift and harsh. The majority of the NBA players’ tweets were shock and awe. Then there were the pointed remarks by NBA stars past and present, and ESPN analyst Stephen A. Smith.

Pierce appears to be throwing shade at KD when he posted: “If u can’t beat um join um.”

Former Pacers star Reggie Miller, who played his entire career in Indiana, said he never wanted to play with his rivals.

“I wanted to beat them,” Miller said on NBA TV. “It was a sense of pride and purpose to beat the other great. Wouldn’t had been nice and probably easier on my body to play with those guys? Absolutely. I’m no dummy to play with Michael Jordan. But I wanted to compete with the other best of my time.”

Hall of Famer and TNT analyst Charles Barkley said he was “disappointed” on Durant’s move.

“Kevin is a terrific player. He’s a good kid. But just disappointed with the fact that he weakened another team and he’s gonna kind of gravy train on a terrific Warriors team,” Barkley said on ESPN Radio’s Mike & Mike. “Just disappointed from a competitive standpoint. Because just like it meant more to LeBron to win one in Cleveland, it would mean more to Kevin to win one in Oklahoma than it would be in Golden State.”

Barkley is one of six NBA MVPs without a championship ring. The other five are Karl Malone, Steve Nash, Allen Iverson, Derrick Rose and Durant.

“It won’t be the same as leading your team where you’re the bus driver instead of the bus rider,” Barkley said.

If you think those were harsh, here’s what Stephen A. Smith said about the Durant decision: “Don’t give a damn what anyone says: weak move by KD. You go to GSW, the team who beat you, when you’re already on a title contender? Please!”

Stephen A. Smith continued on his rant by doubling down on his initial tweet by saying Durant’s move to the loaded Warriors was the “weakest move by a superstar” who is at the height of his powers. Smith said: “Kevin Durant is one of the top three players in the world. And he ran away from the challenge that he faces in order to jump on the bandwagon of a team that’s a little bit better.”

During an online live chat, Smith mentioned that he spoke to Allen Iverson about the KD move. Iverson initially told Smith to stop hating on KD. Then Smith posed this question to The Answer: Would you have left Philly to play with Reggie Miller and the Pacers? Iverson hung up the phone.

Smith ended his rant with a stinging statement. He said Durant could very well win a ring with the Warriors but he’ll never be a champion.

It is hard to argue that Durant’s move was weak. Marc Spears reported that Jerry West’s pitch pretty much clinched it for KD. West told Durant that it still haunts him today that he lost eight times in the NBA Finals. West was 1-8 in the Finals. Durant is 0-1. Of all the pitches Durant heard during his weekend at the Hamptons, West’s voice was the loudest. He did not want to become known as one of six former MVPs who failed to win a championship. Derrick Rose, Iverson, Steve Nash, Charles Barkley and Karl Malone are on that dubious list.

So, Durant took the easy route and joined forces with Curry, Klay Thompson and Draymond Green. When the Warriors take the court on opening night of the 2016-17 season, they will have four All-Stars playing in their prime. No team in NBA history has ever had that luxury. The Golden Boys from the Bay Area puts any super team to shame. Not even FC Barcelona’s super trio of Messi, Neymar and Suarez can top this juggernaut. If you think the Warriors were formidable last season, this season will be ridiculous. They should dominate the league the way Team USA has dominated the world. Losing to the Warriors by 10 points could be seen as a moral victory.

When LeBron James joined forces with Dwyane Wade and Chris Bosh in Miami in 2010, the Heat was coming off a first-round loss in the playoffs and the roster had to be rebuilt to accommodate LeBron and Bosh. The Warriors are coming off a 73-win season and were five points away from winning back-to-back titles.

Durant left an OKC team that blew a 3-1 series lead against these same Warriors. Had Durant not fumble his way to a terrible Game 6 performance, the Thunder may be world champs. Durant had the series in his hands and couldn’t finish the job.

Instead of taking on the challenge of trying to beat the stacked Warriors, KD decided to hop on the Dubs’ bandwagon and sit in the backseat of Steph’s luxury car. Not a good look.