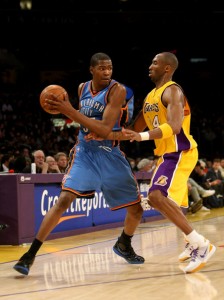 Kevin Durant still believes Kobe Bryant is one of the best players in the world. (NBAE/GETTY IMAGES)

Heading into the 2010 NBA playoffs, Kobe Bryant’s health and the thousands of mileage his body has racked up over the years was a hot-button topic with the media.

Some questioned whether the 31-year-old Bryant, the reigning NBA Finals MVP, could keep up with 21-year-old scoring champ Kevin Durant from Oklahoma City in their head-to-head showdown in the first round.

Durant knew better and he laughed at the notion that Bryant could no longer play at a MVP level.

“Kobe Bryant is the best player in the league, one of the best players in the world,” Durant told reporters after his team was destroyed, 111-87, in Game 5 by Bryant’s Lakers. Durant scored 26 points in Game 6, but made just five of 23 shots in a 95-94 loss to the Lakers.

“He’s Kobe Bryant. He’s going to come out and lead his team. That’s what he’s been doing for 12 or 13 years,” Durant continued. “He doesn’t really have to score on this team to win games now. People say he’s lost a step or whatever, but he’s still the same Kobe Bryant.”

Despite the ankle, knee and finger injuries that have robbed a portion of his game, Bryant is still good enough to dominate a series.

In Game 5, he was able to get his big men easy buckets in the first half when he attacked the basket, which enabled the Lakers to punish the Thunder for 58 points in the paint. And his defense on Thunder point guard Russell Westbrook was crucial to the Lakers eliminating Oklahoma City in the first round.

In Game 6, Bryant killed the Thunder with his scoring. He scored a game-high 32 points on 12-of-25 shooting, including 3-for-4 from 3-point range. The Lakers had just three player score in double digits, but Bryant more than made up for it. His jump shot from the sideline near the OKC bench with Nick Collison draped all over him may have been the second-biggest shot of the game because it cut the Thunder lead to 94-93.

Though Bryant missed his final shot, the amount of attention he got from the Thunder allowed Pau Gasol to sneak in with the game-winning put-back.

Taking in the challenge of guarding Westbrook from the opening tip is what separates Bryant from the rest of the superstars in the league. He didn’t ask Phil Jackson to guard Westbrook in the second half or the fourth quarter, he wanted to shut him down in the first quarter.

That type of killer mentality is the reason why Bryant has four NBA championship rings and it’s the main reason why the Lakers are still the best in the West and the team to beat in the NBA Finals.