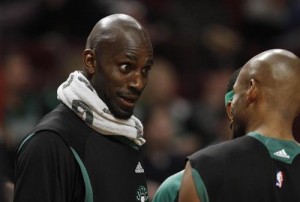 Back in the 1980s, what made the Lakers-Celtics rivalry extra heated was because of the cultural differences between the two ballclubs and their fans.

The Celtics were considered a hard-working, lunch-pail group that was more interested in substance that style. Fans who followed and admired the Celtics followers were predominantly white, mainly because the two best players on the team were white: Larry Bird and Kevin McHale.

The Lakers were considered flashy and more interested in style than substance, which was a direct link – whether it was justified or not – to black players. It didn’t help matters that the ’80s Lakers carried the moniker “Showtime Lakers” and the leader of the team went by the name of Magic Johnson. It certainly heightened the perception.

Flash forward to the new millenium and the Lakers-Celtics rivalry has been renewed. The faces have definitely changed and, more importantly, the racial division has disappeared.

“I think the perception of Boston is a lot different when you live here,” said Celtics forward Kevin Garnett. “I understand it now. I don’t think it’s a white or black thing, but winning does help everything.

“The Celtics are simply like this: if you are a Celtic and you believe in us, then you’re with us. Anything outside of that, we’re against. That’s what it is,” Garnett continued. “Nothing personal or nothing deliberate. I think there are a couple of cities they will say it’s kind of deliberate. But for the most of it, it’s not. If you’re an outsider, you’re not inside the bubble.”

Garnett said when he was in Minnesota he had the same perception that most players and fans had of the Celtics. Garnett didn’t elaborate on the perception, but it is well documented that Boston fans are very tough on black players. But once Garnett joined the Celtics in 2007 and became the face of the franchise, all of his preconceived notions were dismissed.

“Once you’re on the inside, you belong here. You are embraced from the minute you get here,” said Garnett, who has only been a Celtic for three seasons but has already become one of the cities most popular athletes, as well as one of the most beloved. Bringing home a championship in 2008 may have a lot to do with it.

“If you are a study of the game you understand the severity of the tradition here,” Garnett explained. “It all comes with the responsibility [when you] put the green on. It’s not a white or black thing here.”