Age, injuries and gravity may have taken away a big chunk of Kevin Garnett’s physical attributes, but they definitely haven’t affected his mind or his heart. He may not be as quick nor as strong as he was when he was an MVP in Minnesota, and he certainly doesn’t rebound nor defend like he used to, but the Big Ticket still has some value.

Despite all of his limitations, Garnett – who turns 34 this month – can still impact a game in many ways and he is, without a doubt, STILL the most valuable player on the Boston Celtics.

Rajon Rondo is the most dynamic player on the Celtics, Paul Pierce is their best one-on-one player and Ray Allen is their best shooter. But all three have been able to stay in their proper roles because of Garnett.

With Garnett playing the backline of Boston’s defense, Rondo is free to freelance on defense, and Pierce and Allen can push up and play their opponents tighter without fear of getting beat off the dribble. KG is the conductor of Tom Thibodeau’s defensive philosophy, a well-orchestrated scheme that is built on packing the box and protecting the driving lanes, smothering pick-and-rolls and closing out on outside shooters.

The Celtics’ air-tight defense has managed to turn LeBron James into a reluctant scorer, and their masterpiece was on display in Game 5 when they held the two-time NBA MVP to zero field goals midway through the third quarter and cruised to a 120-88 rout to take a 3-2 lead in the Eastern Conference semifinal series.

“We just change up looks,” Garnett explained. “You know, the player of [LeBron’s] status and his ability, he’s so damn good that some of the schemes we just try to slow him down and put extra bodies in places to where he sees a group or a crowd.”

A frustrated and somewhat demoralized James was limited to 15 points below his season average, made just three of 14 shots from the field and was 0-for-4 from 3-point range in Game 5.

“I wouldn’t say he was frustrated, but I could see he was trying to throw this on myself,” Garnett said about James, who is nursing a strained and bruised right elbow. “He was very aggressive, you could see he was ducking his head going to the basket, trying to set up guys and get them easy shots. All the things he usually does. You see him start to take over the game it’s because he’s getting fouls, he’s getting and-ones. I thought we did a good job of crowding him and controlling everybody else.” 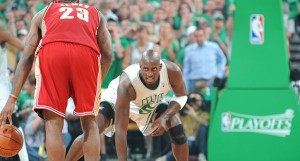 Kevin Garnett and the Celtics defense has been superb against LeBron James and the Cavaliers. (NBAE/GETTY IMAGES)

James’ struggles in the 2010 Eastern Conference semifinals is more of a product of the Celtics’ defense than LeBron’s elbow, the Cavs’ lack of passion or energy, Mo Williams’ disappearing act, Shaquille O’Neal’s rust, or Mike Brown’s in-game adjustments.

“If we have an open look, we have to keep stepping in and knocking them down. You gotta give Boston credit. When we do get open looks, they’re doing a good job of flying out and contesting and trying to run us off the 3-point line as best they can. So, we either gotta let it go or attack the rim.”

With Garnett playing in the post on offense, the Celtics can throw the ball inside and work their offense inside-out. This keeps defenders attached to Allen and Pierce, and affords Rondo more room to collapse the defense with dribble penetration.

The Celtics love the Kevin Garnett-Antawn Jamison matchup and the Cavaliers have not been able to solve this problem through six games. Jamison, who is only 6-7, simply can’t handle Garnett on the block, and his outside shot hasn’t been consistent enough to pull Garnett out of the paint on defense.

“When we are aggressive, especially on both ends, it’s hard to beat us. I really, really believe that. We are a defensive team that can score the ball and at the end of the day we have to hang our hat on that,” said Garnett, who is making 50% of his shots from the field and averaging 18.2 points in the series. Meanwhile, Jamison is shooting 46% and averaging 13.2 points in the series.

And then there is Garnett’s intangibles.

He is the voice of Boston’s locker room. Rondo may be team’s best player and Pierce is the team captain, but Garnett is the team leader.

Boston didn’t have its leader in last year’s playoffs, and it showed last May when the Orlando Magic eliminated the Celtics in seven games in the conference semifinals. Garnett painfully watched from the bench as the visiting Magic celebrated on Boston’s home floor in Game 7.

Fast forward to May, 2010, the Celtics are on the verge of returning to the conference finals and another date with the Magic. But this time, the Celtics have their old Big Ticket with them.