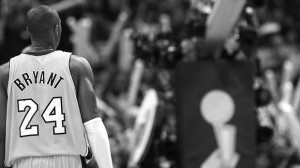 After driving his Los Angeles Lakers to a 100-75 bashing of the Orlando Magic in Game 1 of the NBA Finals Thursday night at Staples Center, Kobe Bryant is beginning to scare a lot of people.

Bryant is so close to winning his fourth Larry O’Brien Trophy that he’s starting to grind his teeth after each jump shot. He’s constantly urging his teammates to strive for perfection. He’s on such a roll that Orlando coach Stan Van Gundy and the Magic players are looking completely deflated. And several members of the media are feeling uncomfortable with his almost grumpy behavior.

Bryant is so close to accomplishing his ultimate goal he can almost taste the victory champagne. The scowl and the serious demeanor show his heightened focus and determination. His will to win has never been higher, which says a lot considering Kobe has been to the mountain top three times in his illustrious career.

But this time it’s different.

“I just want it so bad that’s all. I just want it really bad. It’s just putting everything you have into the game and the emotions kind of flow out of you,” Bryant said after lighting up the Magic for 40 points. He also added eight rebounds and eight assists, the fourth player to post 40-8-8 in the NBA Finals, joining Jerry West, Michael Jordan and Shaquille O’Neal.

The Lakers are only up 1-0, but it seems as though this series is over because Bryant looks like he will not allow his team to lose this series.

“My kids call me Grumpy from the Seven Dwarfs. That’s pretty much how I’ve been at home,” Bryant said. “There’s a lot of motivation. I’m using it all right now.”

The Magic stayed even with the Lakers for one quarter and even took a five-point lead almost four minutes into the second quarter. The Magic led 33-28 with 8:30 left in the first half and that is when Phil Jackson called timeout and inserted No. 24, The Black Mamba, back in the game. From that point on, the Lakers blitzed the Magic, 72-42.

“We have the best player in the game and he came out in attack mode,” said Lakers assistant coach Brian Shaw, who won three championships with Bryant from 2000-2002.

Bryant made Orlando pay for not doubling him, repeatedly torching Courtney Lee and Mickael Pietrus on isolations and pick-and-rolls. He scored on mid-range jumpers, fadeaways, floaters, step-backs and dribble drives. In so many moves, he single-handedly broke Orlando’s spirit.

“When he gets it going, he’s one of the best players of all time,” Lakers forward Lamar Odom said of Bryant. “Offensively, there isn’t anything he can’t do. We understand how much he wants this. He has his game face on. He’s ready, he’s prepared.”

When Van Gundy reviews the video, he will have a hard time watching because Bryant was just scary good and there was nothing Orlando could have done to stop his Unstoppableness.