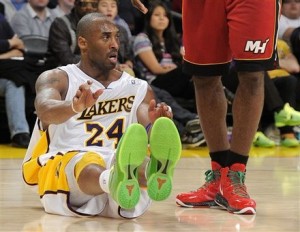 Kobe Bryant wore his emotions on his shoes - his Grinch shoes - during a much hyped Christmas Day showdown with the Heat. (ASSOCIATED PRESS)

The L.A. Lakers, quite simply, were Ho-Ho-Ho-rrible against the Miami Heat on Christmas Day. The two-time defending NBA champions left an awful stench at Staples Center after a 96-80 loss to the traveling circus from South Beach.

It got so bad for the Lakers that coach Phil Jackson joked he developed hemorrhoids sitting on the bench. During his postgame presser, Kobe Bryant broke his silence with the media and promised to “beat” the message of accountability into his teammates when they return to practice. Now, you don’t want to be on Kobe’s bad side. Anyone who challenges his authoritarian position they either get traded (Shaq O’Neal) or forced into retirement (Karl Malone).

Bryant and the Lakers were embarrassed on Christmas by LeBron James and Dwyane Wade – his two buddies from the 2008 U.S. Olympic team. Bryant is not a very good loser so getting punked by two guys, who are considered his chief competition for BPITG (Best Player in the Game), really put the Kobester in a very salty mood.

“I’m going to kick some [butt] in practice,” said the man who wore Grinch-like shoes on Christmas. “It’s going to get through. I’ll beat it in their head until it gets through.”

Bryant had a feeling the Lakers weren’t going to play well coming into their much-hyped game against the Heat on Christmas Day. The Lakers are 4-8 on Christmas Day since 1999 and last year LeBron and his former team, the Cleveland Brons, ruined the holidays by destroying the Lakers by 15 points and turning the normally docile L.A. crowd at Staples Center into a dog pound, tossing their foam fingers onto the court.

“We always [stink] on Christmas,” Bryant said. “I don’t think we’re mean enough to be able to show up on Christmas Day and play. They should just take us off this day.

“I think these games mean more to our opponents than they do to us. I think we need to get that straight. We need to play with more focus and put more importance on these games. I don’t like it.”

Bryant is one of those rare superstars who is never completely satisfied. He knows how hard it is to three-peat, and he is concerned that this year’s team is not as hungry and may have either gotten fat (Andrew Bynum), burned out (Lamar Odom and Pau Gasol) or unfocused (Ron Artest).

Bryant plays to win championships, and anything else is a major disappointment. You won’t see any division championship banners hanging at Staples Center. It’s all about the gold ball. Bryant plans to play in June each and every year. And even though he already has five chips, Kobe is ALL IN each and every season.