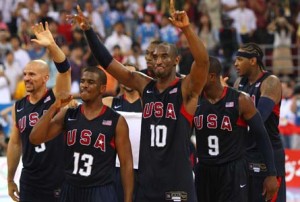 In the greatest gold-medal game in the history of men’s basketball in the Olympic Games, Kobe Bryant proved beyond any reasonable doubt that he is the best player in the world.

When Spain got within two points at 91-89 with about eight minutes left in the fourth quarter, the United States, a team loaded with a number of all-stars, called on No. 10 to close the game and all Kobe Bryant did was score 13 of his 20 points in the final quarter, including a dramatic four-point play that not only gave the United States an eight-point lead but it also resulted in Spanish stud Rudy Fernandez fouling out.

It seemed every time the Americans got in a tight spot, Kobe was there to pull them out of harm’s way. He made a fall-away shot in the paint. He hit a runner over Lakers teammate Pau Gasol. Buried a 3-pointer from the corner. And he converted all his free throws.

When it was all said and done, Team USA won its first gold medal in eight years as it defeated Spain, 118-107, in without question the most competitive gold-medal game in the Olympics.

In 1972, the U.S. lost to the Soviet Union but the game was marred with controversy. Besides, the U.S. did not send its best to compete in Munich. In 1988, the Russians won the gold but it came against college all-stars. Once NBA players started getting involved, none of the games were ever competitive until 2000 when Lithuania came within a 3-point shot of stunning the U.S. in the semifinals. In 2004, the U.S. sent a makeshift lineup and got crushed by Puerto Rico, Lithuania and Argentina.

Spain scored 107 points! That would have been good enough to win gold in any Olympics. Team Espana matched the U.S. shot for shot and, had it not been for Kobe’s late heroics and Dwyane Wade’s game-high 27 points, the United States might be looking at another program-altering setback.

USA Basketball, under the leadership of manager Jerry Colangelo, sent its best (as long as they wore Nike gear) to Beijing. In the gold-medal game, Spain showed why it is a world power in hoops and the U.S. senior men’s national team needed to be at its best to defeat the talented Spaniards, which boasts NBA-caliber players. We all know about Gasol, Juan Carlos Navarro and Jose Calderon but the Olympics introduced us to the future of Spanish basketball in 23-year-old Rudy Fernandez and 17-year-old Ricky Rubio, who looks a little bit like Pete Maravich.

Should USA Basketball relax one bit in 2012 in London, Spain could take over as the No. 1 team in the world. So, I suggest to send this squad to London: Chris Bosh, LeBron James, Kevin Durant, Kobe Bryant, Deron Williams, Greg Oden, Amare Stoudemire, Michael Redd, Dwyane Wade, Rodney Stuckey, Brandon Roy, Mike Miller.

Sorry, Chris Paul. I prefer point guards who can hit a wide-open 20-footer. Sorry, Carmelo Anthony. I’d rather have Amare. Dwight Howard needs to learn how to box out and stop relying solely on his hops before I’d invite him back. For now, Oden takes his spot.

Should LeBron, Kobe and Wade pass on the next Olympics, I would give Kevin Martin, Andre Iguodala and Michael Beasley a call. Let’s call this one: The Repeat Team.