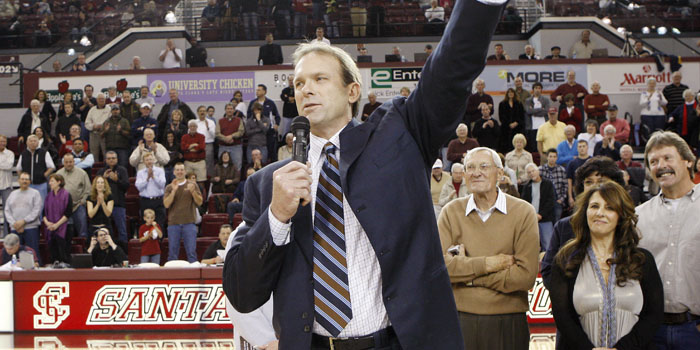 That’s fine and dandy for post-up guys like Al Jefferson and Kevin Love, but good luck getting perimeter players Jonny Flynn, Rodney Carney and Corey Brewer to buy into. That is the danger you’ll encounter when you don’t have a coach or a system in place before you start drafting and signing players to fill a roster.

Carney and Brewer are not what you call stand-still shooters. They’re considered “slashers” and are most effective when they play above the rim. That would work on back cuts and alley-oops, but once Rambis gives the triangle sign and gets his team organized for their half-court set, those slashers will be reduced to playing above the 3-point line or stand in the corner and wait for kick-0uts.

A team does not need a true point guard to run the triangle offense. Fisher, Horry, Paxson and Kerr thrived in the triangle because they can space the floor with their shooting range.

But it is not for everybody. Gary Payton and Jason Kidd both hated the triangle offense.

Because the offense revolved around pinch post and the low block, The Glove was reduced to being The Mitten and had to taper his game so much that there were stretches during a game where he wouln’t even see a shot come his way.

Longtime Phil Jackson assistant Jim Cleamons tried and failed with the triangle offense when he was the coach of the Dallas Mavericks in the mid-1990s, a team that had Kidd, Jamal Mashburn and Jim Jackson.

Kidd was not a big fan of the offense because the read-and-react offense was not built to showcase his playmaking skills.

Flynn, the T-Wolves’ first-round draft choice in June, will quickly find out what Payton and Kidd experienced.

As soon as he crosses halfcourt and the fastbreak is not there, Flynn will need to get the ball to the high post or low block and then find an open spot. He will not get to dominate the ball like he did at Syracuse. And since he does not have the range of a Fisher or  a Paxson, it eliminates the threat of an outstide shot from his side of the floor.

On the other hand, Minnesota’s other rookie, Wayne Ellington, should thrive in the offense because he can make shots from beyond 22 feet. At 6-5 or 6-6, Ellington also has the perfect size to play the wing in the triangle.

So, before T-Wolves owner Glen Taylor and general manager David Kahn buy into what Rambis was selling during the press conference, they should both check the players they have on their roster and re-evaluate the system they’re about to apply.