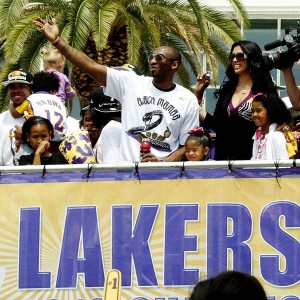 The confetti inside Staples Center have all been swept up, but the celebration continued Monday as approximately 500,000 Laker fans flooded a two-mile stretch of downtown Los Angeles to catch a glimpse of the 2010 NBA champions.

Kobe Bryant, Pau Gasol, Derek Fisher, Ron Artest and the rest of the Lakers rode flatbed 18-wheelers and partied with the rest of the Laker fans, who came as early as 2 a.m. to make sure they got a good spot to see their basketball heroes. The parade began at Staples Center on Figueroa and 11th, and ended at USC’s Galen Center on Jefferson.

Artest wore a Dr. Seuss-looking hat, designed by his daughter, and puffed a victory cigar during the two-hour celebration. Artest, who probably hasn’t slept in almost a week, said he’s going to enjoy this championship for a while, but once the champagne runs out it’s time to go to work. “We have to work harder in the offseason. We can’t have beer bellies,” said the eccentric small forward.

Well said, Ron-Ron. Basically, the Lakers can’t blame it on the a-a-a-a-a-a-a-alcohol if they don’t win it again next year.

It has only been days since the Lakers captured their second consecutive championship, but Laker fans were already chanting “Three-peat!,” “Three-peat!.”

“We’re the favorites because we’re the champs, until someone proves us otherwise. When next season comes around, we’ll be ready. Until that time comes, we’ll enjoy this,” Bryant told Fox Sports’ Michael Eaves.

The Lakers will attempt to win their third consecutive title, something that has been done five times in NBA history. The nucleus of the Lakers are back, but GM Mitch Kupchak has a few decisions to make.

Fisher is one of three key free agents this summer. The other two are backup guards Jordan Farmar and Shannon Brown.

The Lakers are expected to re-sign Fisher, a co-captain with Bryant and is the unquestionable vocal leader of the team. It would be a huge upset if the Lakers didn’t bring back Fisher. Farmar and Brown were key members of the Lakers bench, but the Lakers may not be able to afford to keep both, and each player should get offers from other teams.

Should the Lakers lose Farmar or Brown, the team is expected to bring in some free agents such as Steve Black and Luke Ridnour.

However, the biggest free agent the Lakers must deal with is coach Phil Jackson. The 11-time champion says he is 50-50 on returning as coach wants to give this some thought. Lakers owner Jerry Buss could be force to pay Jackson what he wants now that he has brought a 16th world title to L.A.

Health is the main issue for Jackson, who couldn’t attend the parade because his back and legs won’t allow him to stand for a long period of time. He struggles with the day-to-day grind of the NBA, and at 65 years of age, he knows the end of his basketball odyssey is nearing. Bryant has publicly said he wants Jackson to return, and he’s even willing to chip in to pay for Phil’s next contract. Doc Buss may not have a choice but to open up his checkbook, especially if daughter Jeanie Buss, Jackson’s girlfriend, has a say in the negotiations.

If Jackson returns and Fisher is re-signed, the Lakers should be the heavy favorites to win the 2011 title and complete the sixth three-peat in league history.