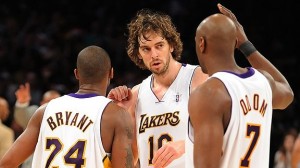 After sleep-walking through the first two rounds of the playoffs and the first four games of the Western Conference finals, the Lakers are now fully caffeinated and wide awake.

Pau Gasol is fully stretched, Lamar Odom is back to form and Kobe Bryant looks unstoppable. To borrow a line from the popular Nike Most Valuable Puppets commercials that features Kobe and LeBron James … “What makes his unstoppableness unstoppable?” Nobody knows.

So, cue the Lakers’ championship parade. Bring back Mark Madsen and let him do a little reign dance in front of Staples Center. Give Jack Nicholson a chest bump. And find one of Hef’s Playmates and give her a smooch. As the late great Chick Hearn would say, “This one is in the refrigerator. The door’s closed, the lights are out, the eggs are cooling, the butter’s getting hard and the Jell-O’s jiggling.” The Lakers are back in the NBA Finals and four victories away from a 15th NBA championship. It’s banner time!

When the Lakers are locked in on defense and playing with a high efficiency on offense, no team in the league – and that includes Cleveland and Orlando – that can stop them. The Denver Nuggets saw the Lakers at their best in Game 6 when the Lake Show dispatched the Nuggets, 119-92, on Denver’s home floor.

The domination was evident from the start. Trevor Ariza got the party started by hitting three 3-pointers in the first quarter. After the Nuggets took a 31-30 lead thanks to J.R. Smith, the Lakers went back to work and the game became one-sided. When the Lakers kicked it into sixth gear, there was nothing the Nuggets could do. Kobe Bryant punctuated the first-half assault by swishing a 3-pointer from the corner to give the Lakers a 13-point lead right before halftime. Dagger!

“All through the series, I saw little cracks in the Lakers. Somehow we’ve cemented those cracks back up and I think they’re the best team right now in the NBA,” said Denver coach George Karl, who reluctantly congratulated the Lakers after they eliminated the Nuggets from the postseason.

As usual, Bryant led all scorers with 35 points on 12-of-20 shooting from the field and was a perfect 9-for-9 from the line. The Black Mamba, who also had six rebounds and 10 assists, showed Carmelo Anthony, Chauncey Billups and J.R. Smith how to close out a series.

“Their offensive execution was the best it’s been all series, and their box defense kinda frustrated our offense,” Karl added. “Then No. 24 had a great five minutes at the end of the (half) that no one in basketball could have covered. He made about four shots during that stretch; I think Jesus would have had trouble covering him.”

Though Karl was mesmerized by Bryant’s holy game, Kobe was not alone in cutting up the Nuggets. Pau Gasol also flirted with a triple-double with 20 points, 12 rebounds and six assists, and his proficiency in the post allows the other Lakers to get involved and creates a better balance on offense and defense.

“The last two games we really proved to ourselves and everybody else that we can be an extremely high quality team that deserves to be in the NBA Finals and is going for the NBA championship,” Gasol explained. “We have to do more of that. I think we have been a little inconsistent throughout the year with that. When we move the ball and use all of our weapons, we become really dangerous because the defense then hesitates and doubt if they double team Kobe or not, or go double team me or not and they’re out of balance. Hopefully we can keep it this way.”

Lamar Odom came off the bench to score 20 points on 7-of-12 shooting and Luke Walton enjoyed his best game of the series with 10 points. When Odom is actively involved in the game, teams have a really hard time matching up with the Lakers because it gives them three highly-skilled scoring options. A perfect triangle offense built to overcome any defense. “Whoever woke up Lamar Odom should be fired,” Karl joked. “I thought we had him contained, but he has been sensational the last two games.”

Karl hinted that when Bryant has is going offensively, Gasol is working his post-up game and the 3-point snipers are hitting their mark, the Lakers become unstoppable.

“We never got control of their post-ups,” Karl said as the Lakers made 43 of 75 of their shots from the field (57%) and were 9-of-16 from 3-point range (56%). “When we doubled it, they scored – the three or the two. And when we didn’t double it, they scored on the post-up. Offensively, they got into control of us more than we got in control of them.”

Right now, the Lakers are in complete control of their destiny and it would not matter who plays them in the NBA Finals because there is no stopping the Lake Show.