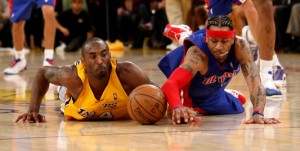 Kobe Bryant and the Los Angeles Lakers fell to Allen Iverson and the Detroit Pistons at Staples Center back on Nov. 20. (GETTY IMAGES)

Before we crown the Los Angeles Lakers world champs for the 2008-09 season, let’s taper down the myopia and examine this team closely. Sure, the Lakers are rolling but their three losses are head-scratchers. The one-point loss to Indiana on Dec. 2 and the blowout loss at Sacramento on Dec. 9 were due to a lack of focus. The Lakers suffered from a serious case of “bitchassness.”

One of the symptoms of bitchassness is the feeling of “being better than others around you.” The Lakers came to Indianapolis and Sacramento thinking they were better than the Pacers and Kings, and played uninspired. Their turnstile-like defense and soft play inside allowed both teams to stay in the game. And I just wish Kobe Bryant would quit throwing passes to himself, such as the one where he shot the ball off the backboard with the intent of getting it back for his own put-back. That play was the epitome of bitchassness.

As for the other Lakers’ setback, suffered at the hands of the Detroit Pistons at Staples Center back on Nov. 14, that game re-opened a couple of old purple and gold wounds.

Let’s face it. The Lakers are far from being a great defensive team. They can slow teams down in spurts, but they cannot lock down on an opponent for long stretches. I’m not convinced the Lakers can stop good teams with their defense, at least not the same defense the Pistons, Spurs, Celtics or even the Cavaliers play. The Lakers’ greatest strength on defense is their length, but if teams can spread the court – like the Pistons and Pacers have done  – you can expose some of L.A.’s weaker one-on-one defenders like Derek Fisher, Sasha Vujacic, Vladimir Radmanovic, Pau Gasol and Jordan Farmar, who are all good defending in space but struggle in keeping guys out of the paint.

Also, the Lakers have yet to get over the mental block of playing against physical teams. It happened in the 2008 NBA Finals when the Celtics disrupted the triangle offense by putting their hands on the Lakers. The Celtics, Cavaliers and Pistons all play physical defense and all three teams are well-schooled in the art of pushing and shoving. When that happens, the Lakers need to toughen up and push back. This is the Lakers’ greatest deficiency. They play with a certain arrogance when they are ahead, but once the other team gets rough, they all tend to fold their tents. Schematically, there is nothing Coach Phil Jackson can do to fix this. This mental block is the most important aspect of the game the “fellas” must overcome in order to win a championship.

Despite their flaws, the Lakers still have the best player in the game in Kobe Bryant and the nobody in the Western Conference can matchup with their length and their depth. The three teams that can stay with the Lakers are Boston, Detroit and Cleveland. But all three reside in the East and only one can get to the Finals.