Staples Center in downtown Los Angeles is jumping early, but you can feel the tension in the building. Laker fans are in full force, with a few Celtic fans sprinkled around the arena.

Tons of streaks are on the line, as well as legacies. Game 7 is where star players become legends. This is one of those career-defining moments that would be replayed over and over again. It’s the Lakers against the Celtics. Amazing does happen! A quarter-by-quarter account of Game 7 of the 2010 NBA Finals:

Derek Fisher opens the scoring with a 3-pointer. Lakers are pounding the offensive boards early and Pau Gasol is having his way against Kevin Garnett on the glass, but can’t finish. Gasol also missed two free throws, a clear message that he’s as tight as a low-rise jeans. Lakers have a 9-0 edge on the offensive boards, but are missing a lot of easy shots.

Ron Artest appears to be lost. Phil Jackson may need to buy him a GPS so he can finally re-join the action.

Rajon Rondo gets a couple of easy baskets and Rasheed Wallace is 2-for-3 from the field early. Wallace goes out with four minutes left in the quarter in favor of Big Baby Davis, who immediately contributes with a couple of layups and two free throws. 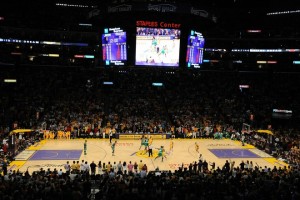 The opening tip of Game 7 of the 2010 NBA Finals at Staples Center in Los Angeles. (NBAE/GETTY IMAGES)

Artest’s inactivity has allowed Paul Pierce to sag on defense and is playing free safety. Lakers appear very tight, while the Celtics are in total sync defensively. The winner of the first quarter has gone on to win each game in the series. Not a good sign for L.A. CELTICS 23, LAKERS 14.

Despite shooting poorly from the field, Lakers continue to pound the glass and that is what’s keeping them in the game. Kobe Bryant makes a short jumper (he’s 2-for8 from the field thus far) and Artest gets a put-back off an offensive rebound to get the Lakers to within four, 23-19, with 10 minutes left in the quarter.

After Wallace missed a three, Lakers had three chances at 3-pointers but Artest, Jordan Farmar and Sasha Vujacic all missed. Bryant re-enters and immediately sets up Gasol for an easy layup. Artest takes the ball out of Ray Allen’s and scores a layup to tie the game, 23-23. Staples crowd finally has something to cheer about.

Celtics are in a serious drought, and haven’t scored in four minutes. Both teams are playing so hard that it is affecting their offense. More bricks than swishes in the first half.

Artest finally makes a 3-point shot and he points to the stands. I think he was giving props to his man Boogie. Lakers continue to jack up threes. Not sure why. Memo to the Lakers: If you have an open three, it doesn’t mean you have to take it. There’s a reason why you they’re leaving you open.

Bryant and Gasol are a combined 6-for-26 in the first half. Yikes!

Lamar Odom’s head is somewhere else besides Staples. LO has one more point than his wife Kloe Kardashian. LOL!

Artest and Pierce gets tangled up under the basket and both got double Ts for staring at each other. Brian Scalabrine sighting! Who gave him tickets to the arena? I guess Doc Rivers feels he can’t do any damage in 34 seconds. Lakers shoot a miserable 26% from the field and Pierce got to the free throw line late to give Boston a six-point cushion. CELTICS 40, LAKERS 34.

Celtics start the half with an alley-oop to Garnett on a feed from Rondo, who is playing a very controlled game. Celtics go up 42-34. Kobe misses a long three. He’s 3-for-15 for the game. Just as I was typing that, Kobe just missed another three. Make that 3-for-16.

Garnett’s 3-point play and Rondo’s floater in the paint gives the Celtics their biggest lead of the game, 47-36, at the 9:45 mark. After a Laker timeout, Bryant misses another jumper (3-for-17!). Rondo follow-up gives Boston a 49-36 lead. Bryant finally ends his drought with a short mid-range jumper to cut the lead to 10.

Celtics have stalled a little bit, allowing the Lakers to make a little run. Artest blows a layup, but Odom follows. His first field goal, cutting the lead to six at 51-45 five minutes remaining in the quarter.

Kobe turns the ball over and his teammates jog back on defense. Pierce hits a three to push Boston’s lead back to nine. Fisher heads to the locker room. Shannon Brown in the ballgame. Lakers had a chance to cut the lead to under five, but Bryant turns the ball over which leads to a Celtic fastbreak. Ray Allen is 1-for-9 from the field. He’s not walking on water in Game 7.

Odom follow up makes it a four-point game with under two minutes left. Odom has provided a nice spark off the bench. Both teams looked gassed. Starters played heavy minutes in that quarter so the benches will play a pivotal role in the fourth quarter. CELTICS 57, LAKERS 53.

Gasol posts up Big Baby Davis, gets fouled and hits the shot. Lead down to two. Pierce overdribbles and turns the ball over. The two best players in the series are struggling mightily. Did I say both teams are gassed? Geez. This is like a marathon with both runners stumbling across the finish line. Water break!

Kobe is playing like someone with a 500-pound weight on his shoulders. Everything is a struggle, even with his ball handling. His timing has been off the whole game and he just can’t find a rhythm on offense. Still plenty of time to correct his issues, but as the game wears on that 500-pound weight becomes heavier and heavier by the minute. 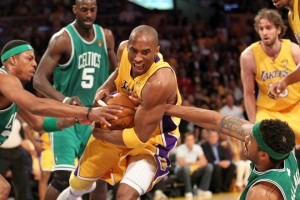 Kobe Bryant protects the ball from Paul Pierce (left) and Rasheed Wallace during Game 7 of the 2010 NBA Finals. (NBAE/GETTY IMAGES)

Bryant catches a break when Ray Allen got his arms locked up with Kobe’s shooting arm. Three free throws for Bryant, which could get him going. Kobe hits all three. It’s now a 59-58 ballgame! Artest scores and gets fouled. His 3-point play ties the game, 59-59 with seven minutes left.

Fisher back in the game, which is key because he’s one of the best clutch shooters in the game. Lakers need his offense and leadership down the stretch. Gasol misses two free throws. Lakers are now 13-for-21 on the line. If L.A. ends up losing this game, they can point to the missed free throws as killers.

Fisher on cue! He hits a huge 3-pointer with 6:13 left to tie the game at 64. Rondo misses a shot and Kobe grabs the rebound and gets fouled. This could be a big five-point swing for L.A. I’m exhausted typing up the action. Imagine how those players feel on the court. Lakers role players have done enough to keep the Lakers in the game. Now it’s Bryant’s turn to close the deal.

Bryant’s FTs give the Lakers their first lead since the second quarter, 66-64, then hits a jumper over Ray Allen to give the Lakers a four-point lead. Doc Rivers is sensing this game is slowly slipping away. Timeout Celtics.

Boston’s offense is on a serious gridlock. Pierce is tired. KG is running on fumes. Where are the Celtics going to get some offense? It doesn’t appear C’s have enough left in the tank to finish this game. They are just fouling the Lakers at this point, which is a sign of a very, very tired team.

Lakers are two minutes away from an NBA championship.

Gasol may have just iced the game. He blocks Pierce’s layup on one end and then drops in a shot on the other end to give L.A. a six-point lead with 90 seconds remaining in the NBA season, 76-70. The crowd is sensing a big-time celebration. Cue the riot squad because there is a party about to happen on 11th and Figueroa.

Wallace, Artest and Ray Allen exchange 3-point shots. With under 40 seconds left, Bryant jacks up a three but Gasol gets the rebound (L.A.’s 23rd offensive rebound), feeds Bryant and he gets fouled. Gasol has been huge in the fourth quarter. I think he just elevated himself to first-team All-NBA status. Kobe makes both foul shots to make it 81-76 with 25 seconds left. Artest has been huge in this game. He’s got 20 points and has locked up Pierce on defense. Queensbridge in the house!

Rondo knocks down a miracle three to cut the L.A. lead to two, 81-79. Rondo then knocks the ball out of bounds with 13 seconds left. Vujacic is fouled by Allen. Facing the two biggest FTs of his life, Sasha swishes two HUGE free throws. Somewhere in Phoenix, Goran Dragic is cursing at his TV.

Rondo misses a 3-pointer and Gasol grabs the rebound (his 18th of the game), outlets to Odom and he flings the ball down the court to Kobe, who runs out the clock. As the great Chick Hearn would say: “The game is in the refrigerator. The door is closed, the eggs are cooling, the butter is getting hard and the Jell-O’s jiggling.” Lakers win the NBA title! LAKERS 83, CELTICS 79.