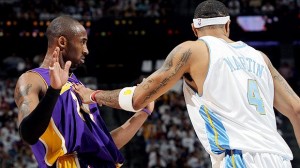 Kobe Bryant scored a game-high 41 points in the Lakers’ 103-97 victory in Game 3, the first playoff game in Denver since 1985. But Kobe received a lot of help. However, help did not come from his teammates. It came in the form of three guys wearing the Footlocker shirts: Dan Crawford, Derrick Stafford and James Capers.

The Nuggets were whistled for 31 fouls, compared to the Lakers’ 24. Two Nuggets starters, Carmelo Anthony and Kenyon Martin, both fouled out and starting center Nene Hilario played nearly the entire fourth quarter with five fouls. That’s 17 personal fouls on the Nuggets starting frontline.

On the other hand, the Lakers’ frontcourt starters Andrew Bynum, Pau Gasol and Trevor Ariza were combined for nine personal fouls. Even if you add Lamar Odom, who committed four fouls off the bench, it still does not add up to the Nuggets’ total.

For the game, the Lakers attempted 45 free throws and converted 31. The Nuggets attempted 31 free throws and made 26. Had the Lakers shot better than 68% from the foul line, Game 3 would have been a blowout. Bryant was the beneficiary of the questionable officiating, cashing in on 15 of 17 free throws. That number was a little inflated because the Nuggets had to intentionally foul Bryant late to extend the game.

In the second half, the Lakers were awarded 28 free throw attempts and the Nuggets received 11. Now, I don’t believe Denver lost the game solely because of the refs, but you have to wonder why there was such a free-throw disparity in the last 24 minutes when clearly both teams were playing with the same intensity on both ends of the court.

Anthony got to the line 12 times in the first half but just twice in the second half. Why? Not sure. When Anthony was asked what the Lakers defense did to him differently in the second half to shut him down, he smiled and paused because he did not want to get fined. Then, he said he “just missed shots.”

“It was the same shots, just missed them,” said Anthony, who finished 21 points but 18 of them came in the first half. “I don’t think they did anything different. I just missed open shots. Some of them was tough, some of them wasn’t. I’ll continued to take those same shots.”

Denver Coach George Karl said the Lakers simply “beat up” Anthony, who made just 4 of 13 shots.

“We usually win the free throw line against most teams. Even though we got 31 free throws, we threw away way too many opportunities,” Karl said. “When you attack, attack, attack, you get a better feel for the whistle. When we went back to attacking in the fourth quarter, we didn’t get a good feel for the whistle. I thought Melo got fouled, I thought Chris Andersen got fouled on the dunk. It seemed like we weren’t getting consistencies on the whistle.”

Karl added that the foul problems prevented the Nuggets from rotation different guys on Bryant.

As much as free throw shooting was a factor in Game 3, it was not the only reason why the Nuggets lost. When the calls were not going their way, the Nuggets self-destructed and made some bonehead decisions that did not help their cause. The technical fouls on J.R. Smith, Linas Kleiza and Anthony Carter did not help, the 5-for-27 shooting from behind the 3-point line did not help and K-Mart’s brain lock during another critical mistake during an inbounds play definitely did not help. Someone needs to the tell Nuggets that you can throw the ball into the backcourt in the last two minutes.

This is how the NBA works. The Lakers needed a split in Denver to keep this series moving. This means the Nuggets will get the benefit in Game 4, and more than likely Anthony and Nene will not foul out; Kobe will not get 17 free throw attempts and the Lakers will be lucky to shoot 30 free throws. The series will be tied 2-2 heading into Game 5 in Los Angeles.