If the Denver Nuggets were competing in the World Series of Poker, they would probably go “all in” on every other hand. It’s the mentality of a supremely confident player with a touch of a cocksure attitude, comparable to a slugger who prefers to swing for the fences with each cut.

The Nuggets are also an eclectic group, a roster that is loaded with guys who put the “swag” in swagger and has about as many nicknames as tattoos.

Melo came into this season in the best shape of his life and was a starter in the All-Star Game; K-Mart appears to have rediscovered the spring in his legs; The Birdman is again among the league leaders in blocks; Mr. Big Shot continues to point this team in the right direction and is enjoying the best season of his 13-year career; and J.R. Swish has never seen a 3-point shot he didn’t like.

Add them all up and you have an extremely explosive and dangerous team capable of beating anyone in the Association. 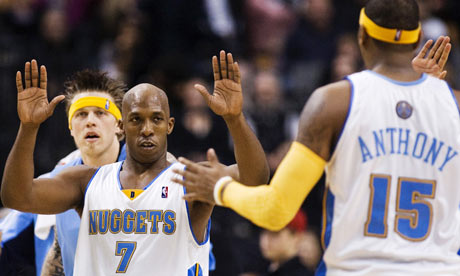 Based on those inspiring numbers, you can certainly make a case for Denver as the best team in the NBA. If anything, the Nuggets are clearly THE team out West who can challenge the Lakers in a seven-game series.

The Lakers were very fortunate to win on Sunday (Feb. 28) as Chauncey Billups (4 for 12) and J.R. Smith (3 for 12) went uncharacteristically cold in the second half and Ron Artest locked up Carmelo Anthony with some old-fashioned bully defense. But don’t let L.A.’s recent victory be the measuring stick for the Lakers-Nuggets simmering rivalry. The Nuggets still lead the season series 2-1 and it took a monumental defensive effort by L.A. to swing the momentum in their favor at home.

The Las Vegas Hilton currently has the Nuggets at 12-1 to win it all, which is very enticing odds considering the reward is higher than the risk.

Despite head-scratching losses to sub-.500 teams such as the Wizards, Clippers, Timberwolves, Sixers and Kings (twice), the Nuggets remain undaunted and have brushed off those minor slip-ups with some really impressive wins.

Last week the Nuggets outlasted the Cavaliers, 118-116, in overtime on Feb. 18, then got drilled by the Wizards the following night, but redeemed themselves two days later by outgunning the Celtics, 114-105.

Though the Nuggets trail the Lakers by 5 ½ games for the best record in the Western Conference, they firmly believe they can compete with the world champs and are convinced they can knock them out without the benefit of homecourt. It’s a belief the Nuggets built up from last season’s six-game war with L.A. that has carried over into this season, evidenced by their two resounding victories over Kobe and Co. 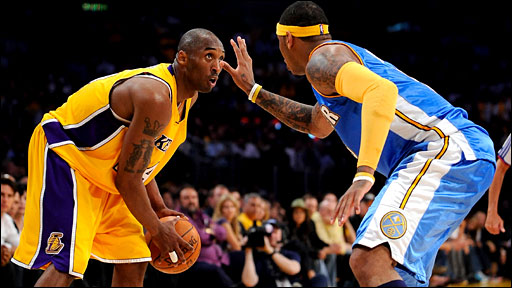 In a 126-113 win at Staples Center on Feb. 5, the Nuggets found a way to overcome the absence of Anthony thanks to Billups, who made nine of 13 3-pointers en route to a career-high 39 points.

“He runs the show, and guys who run the show are really important. Forget the scoring part. He’s got so much more going on. He makes threes and he makes free throws,” Wynn Las Vegas oddsmaker John Avello said of Billups, the Colorado native and veteran point guard who is averaging a career-best 19.8 points per game this season.

Billups’ free-throw shooting (90 percent) is the hidden gem of his all-around game, making him a tough cover late in the game because you don’t want him on the line.

The Nuggets remind me of the 2000 Portland Trail Blazers and the 2002 Sacramento Kings. The Blazers and Kings were deep and talented teams, and each endured a heated rivalry with the Lakers.

The 2000 Blazers – led by Scottie Pippen, Rasheed Wallace, Steve Smith, Bonzi Wells, Arvydas Sabonis and Damon Stoudamire – pushed the Lakers to seven games in the conference finals, but squandered a double-digit lead in the fourth quarter and lost.

The 2002 Kings – led by Chris Webber, Vlade Divac, Mike Bibby, Peja Stojakovic and Doug Christie – thought they were good enough to win the title, but Robby Horry’s buzzer-beater in Game 4 and a few bad calls allowed the Lakers to win the series.

Denver and L.A. are bound to meet in the West Finals this season, and the Nuggets (107.4 PPG) are one of the few teams in the league that can match the Lakers’ firepower (102.7 PPG) and have two guys in the lineup – Anthony and Billups – who are capable of making clutch shots.

It will take the Lakers’ “A” game to defeat the Nuggets in a playoff series. Anything less simply won’t cut it.