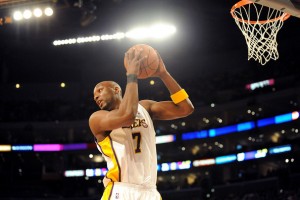 Lamar Odom is posting All-Star numbers since Andrew Bynum went down with a knee injury.(GETTY IMAGES)

When the Los Angeles Lakers season tipped off, the Odom Meter was running low as all eyes were on Pau Gasol and Andrew Bynum. The casual fan and longtime basketball experts were curious to know whether the two 7-footers can co-exist when paired in the post in Phil Jackson’s triangle offense. That meant Odom was relegated to the bench, a move he openly accepted but with some reluctance. Trade rumors started flying around Staples Center.

Because of Odom’s massive contract, most in the organization and the basketball community anticipated that the Lakers were not about to keep a double-digit salary player, with reduced minutes, stay on the roster the whole season. That may have been the prevailing thought until….

Almost a year to day when Bynum suffered a dislocated knee cap against Memphis, the Lakers center sprained his MCL against (who else? the Grizzlies) when Kobe Bryant slammed into his right knee while driving to the basket.

With Bynum out, Odom was back in. The versatile 6-10 forward was inserted back into the starting lineup and, not coincidentally, the increased playing time injected some much needed energy boost into his game. The Lakers are 10-1 with Odom playing with the first unit, and two of those victories came against Eastern Conference powers Boston and Cleveland on the road.

Odom is averaging 17 points and nearly 14 rebounds per game since the promotion. In a four-game stretch that began in Cleveland, Odom hit double figures in points and rebounds: 28 and 17 against the Cavs, 12 and 18 against Oklahoma City, 19 and 19 against Utah, and 15 and 20 against Atlanta. He followed that up with a 12-and-17 outing against New Orleans and a 25-and-14 performance against Minnesota.

The Odom Meter is definitely way up.

The Lakers may not be willing to admit it, but they are much better on offense with Odom and Gasol working together in the frontcourt. Odom’s versatility allows Gasol to just play in the block and not worry about having to share the post with another big man. It is the same formula that powered the Lakers all the way to the NBA Finals last season. Although Bynum’s absence allows opposing teams to penetrate the Lakers defense with a little more ease, L.A. has been able to stem its deficiencies on defense with an offense that has been incredibly explosive and efficient thanks to a rejuvinated Odom.

The odyssey of Lamar Odom brings us to this point, a point where the Lakers are now counting on the same player who they nearly cast aside for some cap relief. Odom is now in a position where he holds the key to his L.A. lifeline. He is hoping for a new contract, whether it will be in L.A. or not.

Even if Bynum does not completely heal in time for the playoffs, the Lakers should feel secure as long as Odom is playing at an all-time high (oops, no pun intended). He says the 39-point debacle at Boston in Game 6 last year still haunts him, and would love nothing more than another oppotunity to play the Celtics in The Finals. Well, if Odom keeps this up (and that’s a big “if”), the Lakers should be big favorites to bring home the chip and stock up for another Larry O’Brien trophy at Staples Center.