It’s great to be a Los Angeles Laker these days, especially when your name is Lamar Odom. You’re team is the defending world champions and it seems like everywhere you go, you are the toast of the town.

Odom is certainly soaking in all the attention being thrown his way, and he now has someone to share it with – girlfriend Khloe Kardashian.

The two were spotted leaving popular Beverly Hills restaurant STK hand-in-hand on Sept. 3, and besieged by paparazzi as they waited outside of the restaurant. They left the location in Odom’s Mercedes. The couple was also seen on the red carpet at the Sept. 9 premiere of “Whiteout,” which stars Kate Beckinsale. The event was held at Mann Village Theatre in Westwood.

Us Weekly and Access Hollywood have both confirmed the two are romantically involved. 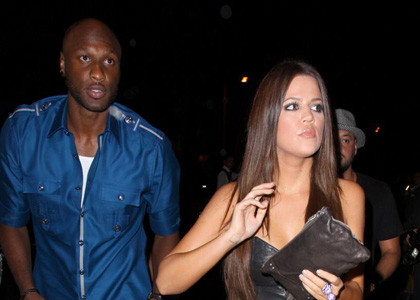 Kardashian, 25, currently stars in the reality show “Kourtney & Khloe Take Miami,” with her older sister Kourtney. Khloe is following in the footsteps of older sister, Kim, who had been dating New Orleans Saints star Reggie Bush. All three sisters starred on the E! reality show “Keeping Up With the Kardashians.”

Lamar, 29, recently signed a four-year, $30 million contract to stay with the Lakers, and Kardashian recently had a body makeover and is beginning to match the sexy bod of her more famous sister, Kim. She had reportedly been dating another NBA player, Rashad McCants, before upgrading to Odom.

Odom is a New York native, but has been living in Los Angeles for quite some time now. He’s been spotted hanging with WBC heavyweight champion Vitali Klitschko before a recent training session at the Pound4Pound Gym in Los Angeles.

While the 6-foot-10 Odom gears up for another NBA season, the 6-7 Klitschko is focused on his Sept. 26 bout with Cris Arreola. Klitschko will defend his WBC belt against the unbeaten, No. 1-ranked Arreola at Staples Center.

The Lakers report to training camp sometime in October and their first preseason game is Oct. 7 against Golden State at the Honda Center in Anaheim. They begin defense of their NBA title on Oct. 27 at Staples Center against the Clippers (7:30 p.m., TNT).