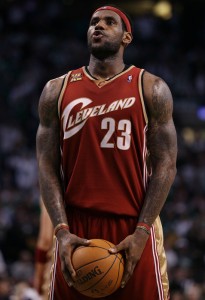 LeBron James needs to take a deep breath before making a decision on where to play next season. (NBAE/GETTY IMAGES)

The moment the Cleveland Cavaliers were eliminated from the 2010 NBA playoffs, all eyes, ears, cameras, binoculars, video players, Twitter followers and Facebook fan pages were fixated on LeBron James and his future. Did he play his last game as a Cavalier? Is he going to New York? Will he sign with Chicago? Is Miami big enough to house LeBron and D-Wade? Can Jay-Z convince LeBron to be the centerpiece of the Brooklyn Nets?

“Me and my team will figure out what’s the best possibility for me,” James said. The “Team” James is referring to is his management group comprised of his longtime friends from high school.

Maverick Carter, James’ former teammate at Akron’s St. Vincent-St. Mary High School who currently is employed by Nike, acts as James’ manager. Two other friends, Randy Mims and Richard Paul, are also on James’ payroll. Mims currently serves as James’ personal assistant and road manager and Paul is a “close confidant.” According to The Associated Press, James and his three friends call themselves “The Four Horsemen.”

Sounds like LeBron and his buddies have been watching too many episodes of “Entourage.” Victory!

As much as it pains Cavaliers fans their beloved team is out of the playoffs, the disappointment of how the Cavs lost in the conference semifinals could be the reason James stays in Cleveland because he doesn’t want his Cavs legacy to end on an all-too-familiar sad note.

James has lived in the state of Ohio since birth and carries Akron everywhere he goes (three of them to be specific). The man can recite Cleveland’s sad sports history in a heartbeat. He was 2 years old when the Browns allowed “The Drive” to happen and he was 5 when Michael Jordan hit “The Shot over Ehlo.” LeBron is a loyal guy by nature and it would be extremely hard for him to bail out on his people, especially at the way the season ended for the Cavs, and uproot his family to a different city.

Like a smart business man should do, James will keep his options open. He’ll fly from city to city, listen to offers and recruiting pitches from various teams before he makes a decision. He’s got an entire offseason to make up his mind.

“That fact that it’s over right now is definitely a surprise to myself. But it is what it is,” James told reporters. “A friend of mine told me after the game, ‘I guess you have to have to go through a lot of nightmares before you finally accomplish your dreams.’ And that’s what’s going on.”

Cleveland’s worst nightmare is seeing LeBron in another uniform. It would dwarf what Packers fans felt when Brett Favre ditched Green Bay for New York and then later Minnesota. Favre wasn’t the reigning league MVP when he skipped town. 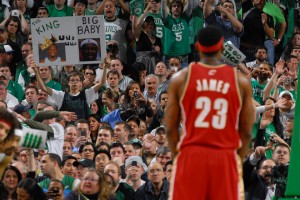 The Cavaliers can offer James the most money and a hometown experience like no other. No athlete in Cleveland sports history, other than Jim Brown, has been more beloved than LeBron. Under the current salary cap restrictions, the Cavs make the most sense financially. The Cavs can offer a maximum deal of $125 million over six years, while other teams are maxed out at five years, $96 million. That’s $30 million on the table James would have to walk away from should he decide to play elsewhere.

“I love the city of Cleveland, of course,” James said. “Another disappointing season, to say the least, but at the same time we had a great time together. We’ll see what happens.”

From a basketball standout, the Bulls are very attractive because they have a collection of young studs  in All-Star Derrick Rose and Joakim Noah. But going to Chicago would mean playing in the shadow of Michael Jordan. If James is willing to shoulder that burden, then Chicago becomes a real viable option. Another reason to consider Chicago is if the Bulls hire John Calipari as head coach. But Calipari, who tried to recruit James to play for Memphis, has done the NBA tour once before. Remember the Nets? All you need to know about Coach Cal’s NBA track record is this: he passed on drafting Kobe Bryant and took Kerry Kittles instead. Case closed.

The Knicks have been gearing up for the Summer of LeBron for two years and have gone all in with their chips, hoping the bright lights of the self-proclaimed basketball mecca and Mike D’Antoni’s run-and-gun offense would be good enough reasons for James to move to New York. But why would James go to a place where a championship is light years away? The only way the Knicks lure James to New York is to bring in not one but TWO superstars to play with him. It’s possible, but highly unlikely because the third wheel would have to take a pay cut.

The Heat and Nets are in the same predicament. Both franchises are tied in to what other free agents would do before James even begin to consider them. The Nets are a lottery team and their best selling point is LeBron’s good friend Jay-Z. Miami is attractive in many ways for James, but Pat Riley’s No. 1 priority is to re-sign Wade and rebuild the Heat roster. It would be nice if can get Wade and James to play in South Beach, but I’m not sure if both men are willing to share the spotlight at this stage of their young careers.

And Back to Cleveland

There are a ton of questions the Cavs need to address this offseason. Is this team, the way it is currently constructed, good enough to make a championship run? Will the Cavs bring back Shaquille O’Neal? Is this the end of the line for Zydrunas Ilgauskas? Can Mo Williams handle playoff pressure? Will the team retain Mike Brown as coach?

Expect sweeping changes in Cleveland. Shaq turns 39 next season and the Cavs are not likely to keep two aging centers on their roster. Ilgauskas could return, but he is also considering retirement. And despite two 60-win seasons, Brown is probably out as Cavs coach.

“I really don’t know everyone’s contract situation as far as years and things like that, but we had a great team. We had a really good team and we played hard all year. We just didn’t play consistent basketball, and that’ s why Boston is moving on. For the most part, as a team, we all get along and we had a great year,” James said. “As an individual, I’m gonna continue to get better throughout the offseason like I always do. And I’ll come back a better player next season.”

At the end of a very long offseason, when it is all said and done and “The Four Horsemen” have exhausted all of the party invitations and red-carpet treatment, James will probably stay with the Cavaliers. He’ll probably sign a shorter deal to keep the Cavaliers on championship alert.

Here are a few scenarios that could play out:

1) James stays in Cleveland but signs a 3-year deal; 2) Wade stays in Miami but signs a 3-year deal; 3) James convinces Chris Bosh or Amare Stoudemire to come to Cleveland; 4) Wade takes Bosh or Stoudemire (or Carlos Boozer) with him to Miami; 6) James forces Cleveland to hire Calipari, but GM Danny Ferry resigns; 7) Cavs are bounced again in the playoffs and James tells Cavs management to bring back Mike Brown and sign his St. Vincent-St. Mary’s teammates to NBA contracts.

The first domino could fall before July 1 so things could change. But after three years and LeBron is still without a ring, then we’re headed for a summer sequel in 2014. By that time, LeBron and D-Wade could be ready to share the spotlight and play on the same team. Which team? Stay tuned.