LeBron James’ problematic right elbow has received so much attention these last few days it has decided to create its own Twitter account, Twitter.com/LeBronsElbow, which now has more than 6,500 followers.

What is LeBronsElbow posting on Twitter? Here is its latest tweet: “LeBron is watching all of his Tivo’ed Veronica Mars shows right now so no COD for the ol’bow…”

Rest is probably the best treatment for LeBron’s famous elbow injury, which was diagnosed as a strain and bone bruise. There is no question James is feeling some pain, but it’s not enough to keep him out of ballgames. Cleveland had three days off since Game 2 so LeBron’s Elbow should be well rested and ready to go for Game 3.

The reality of it is, LeBron’s elbow is just one of the many issues the Cavaliers are facing in their conference semifinal matchup with the Boston Celtics, which is tied at 1-1 and the next two games are in Boston. The play of the Celtics and how they have outplayed Cleveland in the first two games of the best-of-seven series should be the main concern for James and the rest of the Cavaliers.

James says his elbow is not the reason why he hasn’t been aggressive going to the basket, and he gives the Celtics defense credit for keeping him out on the perimeter and making him more a facilitator than a scorer. 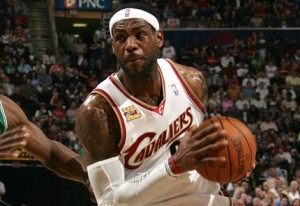 “For me, I always play the game the right way. Throughout the course of the game, if I see things happening where I can convert, then I’m gonna try to attack it. I’ve never been one of those force guys that shoot the ball every time or me scoring is the only way out. I think me being on the court is a threat,” said James, who is averaging 29 points in the series but is shooting 48% from the field and 30% from 3-point range.

James said the Cavs have used the last three days to make adjustments on what Boston is doing to them. He said the Cavs need to be on “the same page” defensively and do a better job communicating with one another. Offensively, James said they have to have better ball movement and avoid playing one-on-one.

On why he has been reluctant to shoot, James said, “It’s just a result of the game being played. I’m just trying to live in the paint, trying to be aggressive and not try to force anything.”

As for those diehard Cleveland Cavaliers fans who are ready to jump into Lake Erie after losing home-court advantage to the Celtics, James said he’s not feeling any added pressure and tells Cavs fans that they don’t need to press the panic button yet.

“It’s one game,” he said. “I understand the burden and the pain Cleveland fans have. I don’t feel pressure at all. I’m looking forward to Game 3. That’s the most important game at this point.”