From this point on, let’s refrain from referring to LeBron James as “King James.” He can’t be The King if he doesn’t have a crown. It’s like a lawyer without passing the bar exam or a police officer without going through basic training.

If the Associated Press is considering to re-vote on its Defensive Player of the Year award after Brian Cushing turned out to be a fraudulent winner, then the NBA should do the same and recast their votes for MVP. 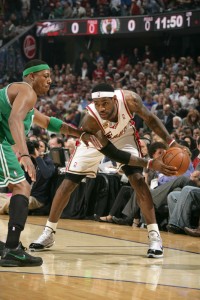 LeBron James did not make his first goal until the six-minute mark of the third quarter in Game 5 and was held to 15 points. (NBAE/GETTY IMAGES)

“I gotta wonder about LeBron’s mindset. Remember how he played in Game 3, when he attacked, attacked, attacked. This [Game 5] was an attack game,” said TNT’s Charles Barkley on “Inside the NBA.” “I take my hat off to the Celtics, but I cannot believe they won that game by 30 points.

“I’ve said all year, I think LeBron is the best basketball player in the world. But I’m 100 percent disappointed. Not the fact that he did not have a good game. But his mentality… like, I’ve played against a Michael Jordan, a Karl Malone, a Patrick Ewing. Listen, their guns were gonna be empty by the end of the game. And I did not see that tonight. Clearly, in the biggest game of their season, I did not see the aggressiveness I needed from an MVP at all. ”

In a stunning development that has every Cleveland fan – and basketball followers everywhere – scratching their heads, James and his Cavaliers have dug themselves into a deep hole, a hole they may not be able to climb out of. The Cavs, owners of the best record during the regular season and a team that many experts pegged to represent the East in the NBA Finals, are down 3-2 to the Celtics. Boston can close out the series with a victory in Game 6.

James credits Boston’s defense for his recent shooting woes and blames himself for not being able to take advantage of his opportunities.

“Of course their defense had a little bit to do with it, but I just missed a lot of shots. I missed a lot of open shots that I’m capable of making,” said James, who didn’t convert his first field until the 6:15 mark of the third quarter. “They played me the same way they played me all series. I just wasn’t able to knock down those shots I was able to get good looks at.”

James’ 2010 playoffs can be described as uneven. He has shown flashes of brilliance in games 1 and 3, both victories for the Cavs, and three subpar outings (games 2, 4 and 5) that has baffled many, including his head coach.

“It is unlike him. He had an off night [in Game 5], which is abnormal. He brings it for us almost every night. He tried to bring it tonight, but it was an off day. But he’ll be ready to go in Game 6,” Cavaliers coach Mike Brown said of his struggling superstar.

For the Cavaliers to advance to the conference finals, James needs to be great. Right now, he’s just good enough to win two games. And if the elbow injury is the reason why James hasn’t been himself lately, it’s not a good enough excuse for a player of his caliber. He can’t be hurting more than Kobe Bryant, who has a fractures index finger, a sprained ankle and a creaky right knee.

Bryant scored 30 points in his last four playoff games and made sure his L.A. Lakers didn’t let up against the underdog Utah Jazz.

It’s an absolute joke that Kobe didn’t get a single first-place vote for MVP. How quickly we forget Bryant’s greatness. He is without question the best closer in the game. No one in the league makes more game-winning shots than The Black Mamba. Kobe was responsible for six game-winners this season alone. Six!

The difference between James and Bryant is that Kobe wants to win every quarter of every game and is an absolute killer in crunch time, while LeBron plays well in spurts and picks his spots. Bryant also has a more well-rounded game and can score in various ways. James often settles for 3-point shots and his post-up game is a work in progress.

With the Cavs on the brink of elimination, the focus shifts to LeBron’s pending free agency this offseason and was asked if he had played his final home game as a Cavalier?

“I didn’t think about that. I feel like Game 6 is a huge game for us. Game 5 was a huge game, we just didn’t come out and play particularly well all game,” James said. “I think that first quarter we did well, didn’t play particularly well in the second quarter, third or fourth. Me saying up here this was our last game here, it wouldn’t be me. It wouldn’t be our team.”