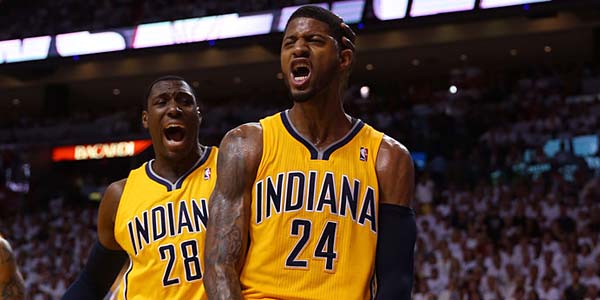 Paul George has been one of the breakout star of the 2013 NBA playoffs. (GETTY IMAGES)

You know you’ve arrived as a legitimate superstar in the NBA when LeBron James gives you a dap in the heat of battle.

Paul George followed his 27-point performance in Game 1 with an even better all-around effort in Game 2 of the Eastern Conference finals against defending champion Miami. His loudest play came with under 10 seconds left in the third quarter when the Indiana Pacers’ super swingman took the ball at the top of the circle, drove left past LeBron, and posterized Chris “Birdman” Andersen at the rim with a monster slam …. and one!

Not to be outdone by a visiting player in his own building, James came right back with a 3-pointer before the third-quarter buzzer sounded right in George’s face. Moments later, LeBron turned to George and gave him some love by slapping his hand. Not many guys can go head-to-head with the four-time NBA MVP and gain the upperhand.

“He’s really good. He’s gonna be a great one,” LeBron said of the Pacers’ 23-year-old All-Star. “His maturity and his game has definitely risen because of the opportunity [Indiana coach] Frank Vogel has given him. His teammates have a lot of confidence in him and he has confidence in himself.

“I love competition and I’m gonna be up for the challenge and try to be there for my team as well.”

The 2013 NBA playoffs has turned into a coming-out-party of sorts for George, who in the previous round gave Knicks star Carmelo Anthony fits with his stifling defense. Melo is probably still seeing No. 24 in his sleep for the way George got in his jersey during the East semifinals.

“He’s a third-year player, his third year in the NBA, and going against the best player in the world in LeBron,” Vogel said. “He’s guarding him the entire night and carrying an offensive scoring, and just making confidence-building plays on the offensive end.

“He makes the extra pass, always, finishes at the rim, and he has given us a huge, huge lift.”

George and Roy Hibbert were huge in the Pacers’ 97-93 win over the Heat in Game 2. Hibbert had a game-high 29 points, while George had 22 points on 9-for-16 from the field and six assists in 38 minutes.

But George has done much more than just score in the first two games of the series. He has played point guard when George Hill and D.J. Augustin struggle with ball pressure, and he has taken on the monster task of defending LeBron for the majority of the game.

When TNT’s David Aldridge asked LeBron what’s the next step is for George to become an elite player, James said: “I know the answer to that but I’m not gonna say it right now while I’m competing against the guy. He might use it during our matchup right now. I’ll answer that after the series.”