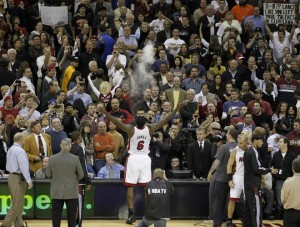 LeBron James does his usual power-toss routine before the game and then he smoked his former team for 38 points in his return to Cleveland. (GETTY IMAGES)

It was a memorable and unabashed return to Cleveland for LeBron James.

The moment he stepped on the court at Quicken Loans Arena in Cleveland, he had an extra hop in his step, razor-sharp focus and played with a ton of bad intentions. Cavs Nation took shots at LeBron all night, and he shot right back. He even went through with his pregame powder-toss routine, a loud and clear message to Cavaliers fans that he was going to smoke them on this night. And he did.

The second time James touched the ball in the first quarter, he buried a baseline jump shot over Anthony Parker. With the game tied at 17, he drove baseline and scored on a reverse layup to give the Heat the lead. That shot ignited a 16-0 Miami run and the Heat never looked back.

Then LeBron applied the finishing touches to his in-your-face performance with a dominant third quarter, a quarter in which he scored a Quicken Loans Arena record 24 points. He couldn’t miss. He made jump shots, layups and alley-oops. By the time he left the court for good, the Heat had built a commanding 30-point lead.

LeBron James and his new family, the Miami Heat, basically went back to Cleveland and showed all Cavs fans what they’re missing. It was like watching your girlfriend kissing Stan Gable in your house while Olger was thrashing your living room and drinking all your beer.

LeBron’s stat line: 30 minutes (three quarters), 38 points on 15-for-25 from the field, five rebounds, eight assists, no turnovers and numerous not-so-friendly chats with the Cleveland bench.

Nothing fazed LeBron on this night despite a steady stream of boos and obscenities from the same fans who cheered him the past seven seasons. The fans came out in full force, with signs that read “LeQuitter,” “LeLoser,” “Witless,” “Quitness,” “11-8? Looks Like You Left Your Talents in Cleveland,” “You’re Only A Prince in Wade’s County,” and “Betrayed.” Fans also made T-shirts that read “Lyin’ King” and “Queen James.”

You have to hand it to the Cavs fans. They definitely brought their Hate Game and unleashed it on the two-time NBA MVP, who has now joined Art Modell as the most hated man in Cleveland, Ohio. Just too bad the Cavaliers players couldn’t match the energy and passion of their fans.

As James kept throwing haymakers at his former team for much of the night, the Cavaliers players went down faster than Michael Spinx.

Chris Webber described the Cavs’ performance as a “wet, soft tissue.” Charles Barkley couldn’t believe how the Cavs players did absolutely nothing as James continued to strut and yap near the Cleveland bench where owner Dan Gilbert was within earshot. Barkley said he would have knocked somebody down if his team was getting trashed.

James’ in-game chatter really angered head coach Byron Scott. Scott is an old-school guy, and he just couldn’t understand why his guys were fraternizing with the enemy. Michael Jordan never joked with Isiah Thomas and the Pistons. Larry Bird never shared pleasantries with Magic Johnson and the Lakers during their heated playoff battles.

Chants of “Akron Hates You!” and – my personal favorite – “Scottie Pippen!” rained on LeBron throughout the second half as the Heat poured it on the overmatched Cavaliers. LeBron even cracked a smile when Cavs fans amped up the booing while he was on the free throw line.

After the game, Craig Sager asked LeBron is he wanted to take this opportunity to apologize to Cavs fans for what transpired last July. LeBron said,  “I don’t want to apologize. My intentions was not to hurt anyone. My intentions was solely on kids during the whole process. I always say, the decisions I make I live with them. There’s always way that you could correct them that you could do them better, but at the end of the day I live with them. And I’m satisfied and happy with that.”

James certainly got the last laugh on a night when Cavs fans was supposed to put closure on this whole ordeal. Instead, their emotional scar got even worse.