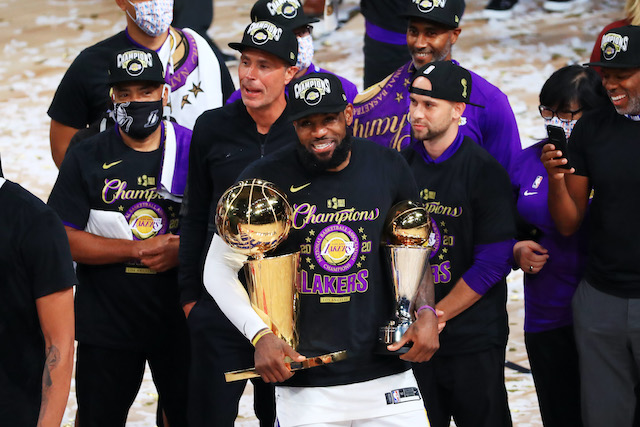 Haters are gonna hate. Those are the words of the great American lyricist Taylor Swift.

LeBron James has been so historically great that we tend to overlook or even dismiss his greatness. His resume is about as complete as any legendary hooper. His legacy is set. He doesn’t need to prove anything. However, no matter how much success he has achieved, LeBron still has detractors. There seems to be this “but” at the end of some LeBron narrative. No matter how many records James breaks, his haters find something to pick on.

He took a below average Cleveland squad to the 2007 NBA Finals, but he got swept by San Antonio.

He won two championships in Miami, but he lost to Dallas and San Antonio.

He ended Cleveland’s 52-year championship drought in 2016, but he lost three out of four times in The Finals to Golden State.

It doesn’t seem to matter what LeBron does. It is never enough to shut down the haters. And that’s fine with him because it is the very thing that fuels his thirst to strive for greatness.

Add winning a championship for basketball’s version of Camelot to LeBron’s outstanding resume. James ended the worst six-year period in Lakers history after winning the 2020 NBA title inside the Disney World bubble. When you bring home the Larry O’Brien trophy to L.A., you elevate your GOAT card from gold to platinum. He is now firmly in the top five, joining Michael Jordan, Magic Johnson, Kareem Abdul-Jabbar and Kobe Bryant.

“I told [Lakers owner] Jeanie [Buss] when I came here that I was gonna put this franchise back in the position where it belongs,” James said during the postgame ceremony shortly after securing his fourth NBA title with his third franchise and winning his fourth Finals MVP. He’s the first player to win Finals MVP with three different teams. He won it twice with the Miami Heat, once with the Cleveland Cavaliers and L.A. Lakers.

How can you not respect what James has done in his career? What he has accomplished in the postseason alone should be enough to give him the respect he richly deserves. He took down Oklahoma City and its three MVPs Kevin Durant, James Harden and Russell Westbrook in 2012. He took down the mighty Golden State Warriors and their three sure-to-be Hall of Famers Steph Curry, Klay Thompson and Draymond Green in 2016. And in 2020 at age 35 and his body battered by 17 grueling seasons, he somehow found the mental and physical strength to lead the Lakers to their 17th world championship in arguably the most difficult NBA season. He didn’t have the benefit of home-court advantage. His team was mourning the death of Kobe. He had to deal with all the stress happening outside the bubble such as the protests nationwide over racial injustice and the deadly pandemic that put the world on lockdown.

“They’re all special in their own right. They all have their obstacles,” James said of his four championships. “Things that went on during the course of the year on and off the floor. But one is not less than the other. When you are able to put yourself in this position to win a championship the first thing you think about is how much work you put in over the course of the year. How much you’ve sacrificed, how much you’ve dedicated to the game and to your craft. That’s always been the most fulfilling thing for me besides seeing my teammates as happy as they are. Being able to knowing that you can put the work in, literally trust the process, live about the process and then see the results. Not only from a basketball player but from everybody. Whatever craft, whatever work space you’re in to be able to put the work in and live along the process and build along the process and see the results, I think we all live for that moment.”

For the LeBron doubters who feel that winning a title in the bubble isn’t legitimate or must be marked with an asterisk, Lakers general manager Rob Pelinka delivered the perfect response.

“We had to face so many things,” Pelinka said. “The social unrest that the country faced. The January 26 tragedy [when Kobe Bryant died]. The pandemic. They really draw you deeper to what matters; your faith, your family, your friends. I think what we’ve been able to accomplish means even more because it was hard. A lot of people say ‘Oh, will there be an asterisk on the 2020 championship?’ I think there’ll be a gold star, a badge of honor, because it’s been so tough to get to the end.”

Lakers head coach Frank Vogel competed against LeBron when he was the coach of the Indiana Pacers for five seasons. He found a greater appreciation for LeBron after coaching him for one season in L.A. “He’s the greatest player the basketball universe has ever seen,” Vogel said. “If you think you know, you don’t know until you are around him every day coaching him, you’re seeing his mind, you’re seeing his adjustments, seeing the way he leads the group. If you think you know, you don’t know.”

Vogel added: “Coaching against him, you don’t think you can be any more impressed with what he brings to the table. But then when you coach him you understand that it’s more impressive coaching him than coaching against him because of the intellectual mind that he has about the game of basketball and all that goes into it. The importance of defense, the importance of chemistry, the importance of collaborating with the coaching staff and the front office, and being a team player. Being coachable. All those types of things you don’t see from afar unless you’re around him everyday. I just couldn’t be more impressed for what he’s done for our team this year.”

LeBron turns 36 in December. He will entering his 18th NBA season. There’s no telling how many more years he has left. Even LeBron is noncommittal on how long he wants to play. He hasn’t put a cap on it. “I know I got a lot of years left. I know I can continue to play at a high level,” said James, who has hinted on many occasions that family comes first. He has three kids, including one (Bronny) who plays for high school basketball powerhouse Sierra Canyon.

Whatever the case may be, if LeBron decides to hang up the sneakers to become a full-time dad and businessman, his basketball legacy is secure.  And for those people who still doubt his greatness, LeBron’s message: Bring it on.

“I think personally thinking that I have something to prove fuels me. And it fueled me over these last year and half since my injury,” James said. “It fueled me because no matter what I’ve done in my career at this point there’s still rumblings of doubt. Comparing me to the history of the game. Has he done this? Has he done that? Having that in my head, having that in my mind, I say to myself ‘Why not still something to prove.’ I think it fuels me.”

After making that impassioned remark, LeBron put a cigar in his mouth and took a few puffs. He took a moment to let his detractors and doubters know — if they don’t know already — what he just did. He smoked them all.