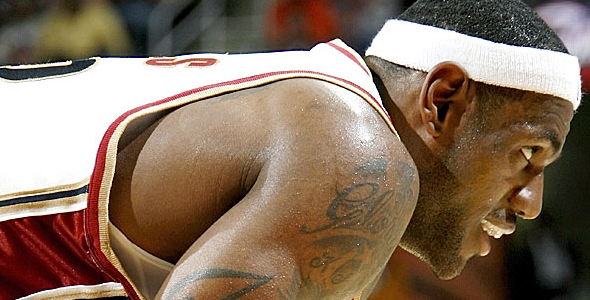 LeBron James revealed last night that he is thinking about changing his jersey number.

James told TNT’s Craig Sager that he will likely ditch No. 23 and switch to No. 6 – the number he wore when he played for Team USA in the Olympics – as his way of honoring his idol Michael Jordan, who was in attendance at American Airlines Arena in Miami to watch James’ Cleveland Cavaliers play Dwyane Wade’s Miami Heat Thursday night.

“He’s the greatest basketball player to ever play the game,” James said of Jordan. “I’ve been thinking about it lately and what I’m gonna do is I think I’m gonna change my number next year. No guy in the NBA should ever wear 23.”

James believes that since Jordan can’t get the NBA logo, the best way to recognize his greatness and contribution to the growth of the league is to retire his No. 23 around the league.

“His number shouldn’t be worn by any player in the NBA,” James said. “What he did for this game, he laid down the stepping stone for everybody who came up through the ranks. That’s how much respect I have for a guy like that.”

Now that LeBron has committed to a new jersey number, Sager tried to get him to commit to a team in 2010 to which James replied: “We’ll see.”