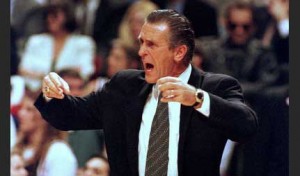 Pat Riley coached the Lakers and Heat to NBA titles and the Knicks to the NBA Finals.

The Armani suits. The slicked-back hair. The clenched fist.

Everything about the man exudes class and confidence. But Patrick James Riley is much more than just a confident, well-dressed basketball coach. He is the quintessential leader of men and master motivator. He is a champion. Six times to be exact. Once as a player with the Los Angeles Lakers in 1972 and five times as head coach. Only Phil Jackson and Red Auerbach has more.

As the ringleader of Showtime in the 1980s, he pointed the Lakers to NBA championships in 1982, 1985, 1987 and 1988. The Lakers were the team of the decade because Riley pushed them to succeed. He pushed Magic Johnson to be the best. He extended Kareem Abdul-Jabbar’s career. He allowed James Worthy the freedom to run the break. He maintained excellence for nine seasons.

Most sports fans see Pat Riley as this celebrity coach who looks the part rather than plays the part.

That my be true but that is also what made him one of the most recognizable faces in sports and one of the richest. That look and whole aura was so unique and powerful that Michael Douglas channeled it to his role of Gordon Gekko in the movie “Wallstreet” where Douglas won an Oscar.

Riley’s resume is stout. He won 1,210 games which is third on the NBA’s all-time list behind Lenny Wilkens and Don Nelson. His 171 postseason victories rank second in league history, just seven behind Phil Jackson. Riley has averaged over 52 wins per season in his coaching career. In 1996-97 as the NBA celebrated its 50th anniversary, Riley was named one of the top 10 coaches of all time.

After Riley left the Lakers in 1990, he went to the New York Knicks and Gotham City was never the same. Madison Square Garden became Hollywood East. It didn’t take Riley long to establish the Knicks as an NBA elite. Patrick Ewing, the face of the franchise, bought into Riley’s system. In 1992, Riley’s band of bullies pushed Michael Jordan’s Chicago Bulls to a tough seven-game series in what became as the blueprint of the style of play for the 1990s.

In New York, Riley played to his team’s strengths. What the Knicks lacked in style they made up for it with substance. More grit than glamour. Once Riley made a believer of Knicks captain Patrick Ewing, the rest of the team fell in line. Riley preached accountability, discipline and effort especially on the defensive end. Very rarely did opposing teams outworked a Pat Riley-coached squad.

The Knicks finally broke through in 1994 and reached the NBA Finals. The Knicks lost to the Houston Rockets in seven games and Riley became divorced from the Knicks. The separation was ugly. The Knicks vowed to beat Riley any chance they get and Riley vowed to finish the job somewhere else, but he needed to start from ground zero.

In 1996, Pat Riley became the president and coach of the Miami Heat. A franchise that has barely made a dent in the league. It was to be Riley’s greatest challenge. He got Alonzo Mourning to come aboard and be his centerpiece. He brought in Tim Hardaway to be his point guard. He traded for Eddie Jones. He signed Brian Grant. He drafted Caron Butler. He picked up hardnosed guys like Bruce Bowen, Keith Askins, P.J. Brown, Ike Austin and Anthony Carter to be his role players.

Despite all the hard work and shrewed moves, the best the Heat could do was the Eastern Conference finals. The losses started to wear down Riley, especially the playoff defeats at the hands of the rival Knicks. Riley knew he needed to retool.

After a disappointing 2002 season, Riley and Heat found themselves in the 2003 NBA draft lottery. Riley wanted forward Chris Bosh but Toronto nabbed him with the fourth overall pick. He settled for a combo guard from Marquette with a weird first name. Once Riley saw the potential in Dwyane Wade, he took a chance and traded three players (Lamar Odom, Butler and Grant) to the Lakers for center Shaquille O’Neal prior to the start of the 2004 season.

With Wade and O’Neal, Riley got his Magic and Kareem. He got his Mr. Inside and Mr. Outside. Riley knew he had something special. He made sure Wade and O’Neal had the right pieces around them. It took him two years but Riley, the general manager, got it done…by any means necessary. Even if it meant shoving aside longtime friend Stan Van Gundy.

The Miami Heat started the 2006 playoffs with a classic Riley battle cry. Riley used a us-against-the-world mentally and hammered the point of being one unified strong team. Fifteen strong. The Heat carried this mantra all the way to the NBA Finals en route to winning the franchise’s first championship.

It was Wade’s first, Shaq’s fourth and Riley’s fifth.

He won with an unlikely cast of characters. It was a team somewhere in between his Lakers and Knicks. Just talented and gutty enough to push forward. Riley pushed point guard Jason Williams to tone his game down. He pushed Wade to be great. He convinced Mourning, Antoine Walker and Gary Payton to play secondary roles. And Riley masked Shaq’s deficiencies by limiting his minutes and allowed O’Neal to dominate in spurts, giving the opposition the illusion that The Diesel still had some left in the tank.

Comedian Chris Rock joked about who should be the leader of Black America.

“Coach Pat Riley!” Rock says. “He may not win it all but he’ll get you to the Promised Land!”

Chris Rock may have been delivered the line with tongue firmly planted on the cheek but it rings true about Pat Riley, the coach. He is a leader of men and his place in basketball history is now cemented after being inducted into the Basketball Hall of Fame in Springfield, Mass.