France’s Nicolas Batum lost his cool against Spain in the quarterfinals of men’s basketball at the London Olympics. (GETTY IMAGES)

For a country known for being good lovers instead of good fighters, France unleashed its dark side and took it out on Spain.

Nicolas Batum and Ronny Turiaf, two players who don’t have thuggish reputations in the NBA, lost their cool at the end of a heated quarterfinal men’s basketball game at the London Olympics won by Spain, 66-59.

The shenanigans started with 24 seconds left when Turiaf shoved Rudy Fernandez at midcourt. It was a hard foul, but because Fernandez definitely embellished the contact — as he is known to do in his career — the Spaniards thought an unsportsmanlike personal foul should have been called on Turiaf.

On the next in-bounds play, Batum gave the Spaniards something to really cry about as he took a swing at Juan Carlos Navarro and his schoolyard-like wild right punch landed on Navarro’s groin. Apparently, groin shots are becoming real popular in London (see Carmelo Anthony and Argentina). 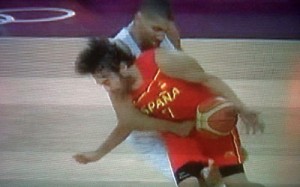 Afterwards, Batum told Yahoo! Sports writer Adrian Wojnarowski he wanted to give Navarro “a good reason to flop.” The Spaniards’ dubious reputation for flopping has irked the Portland Trail Blazers forward and his French teammates.

Batum’s low blow capped off a very frustrating game for France. It led for much of the ballgame, but struggled to find the basket in the fourth quarter. Batum made a running shot with 6:50 left in the fourth to give France a 57-54 lead. That was France’s last field goal until Mickael Gelabale broke the 6:45 scoring drought with five seconds left in the game.

Pau Gasol ignited the 12-2 fourth-quarter run for the Spaniards when he rejected Nando Di Cola’s layup and that defensive play led to a dunk by Sergio Llull to give Spain the lead for good at 58-57. Spain’s defense was superb in the fourth quarter, holding France to just six points in the quarter and forcing 11 straight misses in the last six minutes. In one key possession, Tony Parker had his jump shot blocked by Fernandez and then Ronny Turiaf’s follow-up under the rim was stuffed by Pau. A great defensive stand by a team not known for lockdown defense.

Spain stretched the lead to 62-57 with 45 seconds left when Pau found his younger brother, Marc, under the basket for a layup that essentially cinched the victory and a trip to the semifinals. The Gasol brothers combined for 24 points and 19 rebounds. Parker led France with 15 points.