The Phoenix Suns made two very powerful statements in Game 2 of their best-of-seven Western Conference semifinal series against the San Antonio Spurs.

First, the Suns wore their “Los Suns” jerseys on Cinco de Mayo to show their support for the Hispanic community of Arizona, a strong political message from a NBA franchise that is in the middle of a controversial immigration issue.

Second, after winning Game 2, 110-102, the Suns jumped to a 2-0 series lead and sent a loud message to the Spurs – a team that has eliminated the Suns four times in five years – that they are determined to break the San Antonio spell and finally win a series against their playoff nemesis.

The first message was a public display of discontent with Arizona’s immigration bill, while the other was more unspoken. Either way, both were delivered with force and the Suns are not backing down from either stance.

The law has sparked a national uproar, with politicians, pundits and citizens weighing in – including Suns All-Star and former two-time league MVP Steve Nash. 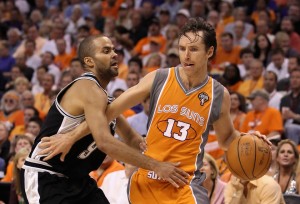 Steve Nash is defended by Tony Parker during Game 2 of the Suns-Spurs series. Nash scored 19 points and had six assists to lead Phoenix to a 2-0 series lead. (NBAE/GETTY IMAGES)

“I’ll speak for myself. Our team was proud to wear the jerseys because we feel a sense of pride in our Latino community,” said Steve Nash, who along with Suns owner Robert Sarver have publicly questioned the new immigration bill.

In a statement, Sarver said: “The frustration with the federal government’s failure to deal with the issue of illegal immigration resulted in passage of a flawed state law. However intended, the result of passing the law is that our basic principles of equal rights and protection under the law are being called into question, and Arizona’s already struggling economy will suffer even further setbacks at a time when the state can ill-afford them.”

It was Sarver’s idea to have his team wear the “Los Suns” jerseys for Game 2 and he got the blessing from the NBA and the Players’ Association, and the Suns players were willing participants.

“Our Latino community is what makes this state great because it gives us a diversity and a lifestyle that is great. It’s important that we stand up sometimes for what we believe in,” Nash told reporters during a postgame news conference. “I don’t want to alienate anybody. Those people that disagree with me is fine. Discourse is what democracy is made on, and I think that it’s not something [people] should take personally.

“My beliefs, our team stood up for that part of our community because I think that’s the one targeted by this side of this bill that could open the door to racial profiling and racism. And I’m talking primarily about American citizens who are Latino. Now their quality of life and freedoms could change because of this bill. I think it also puts undo pressure on police officers, and unrealistic expectations.”

Nash added: “Having said that, the bill is continually changing and it seems it will continue to change. So, it’s impossible to have a stance. I’m proud of our owner for taking a stand, but we are not out there to alienate. We all want this to be about loving of our community. Regardless if people agree with us or not, we have love for everybody out there. We just like to get to a consensus that everyone can live with and it isn’t a possible infringement on human rights.”