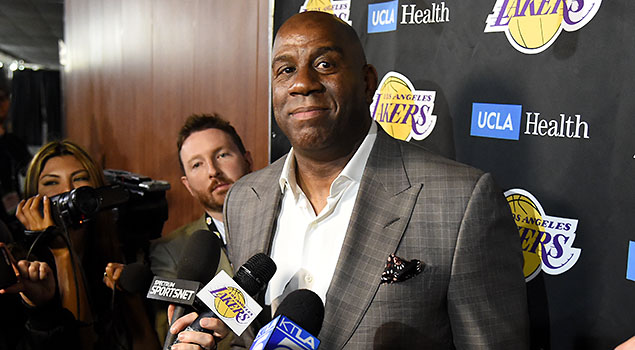 There is no need to drum up any conspiracy theories on what happened to the Los Angeles Lakers. Magic Johnson basically told you what went down in Tinseltown during his 45-minute impromptu press conference announcing his resignation as the team’s president of basketball operations.

To summarize the State of Magic address, he didn’t want to be the bad guy.

“I had more fun when I was able to be big brother and ambassador to everybody,” Johnson said. He mentioned not being to make a simple tweet about Dwyane Wade’s retirement or give young superstar Ben Simmons some advice without hearing from the NBA police. He racked up almost $600,000 worth of fines for speaking publicly about Paul George and Giannis Antetokounmpo.

What really irked Magic was the way the whole Anthony Davis ordeal went down. Magic didn’t think the New Orleans Pelicans negotiated in good faith as the Lakers tried to acquire the All-Star center. There were too many leaks to the media, and it almost looked like someone bugged Magic’s phone.

Putting Magic in a box is not fun for Magic. And Magic wasn’t having fun running the Lakers from the executive chair.

So when it was time for Magic to fire some folks in the Lakers’ building, he called timeout and took himself out of the game.

BREAKING: Magic Johnson has stepped down as Lakers' President of Basketball Operations. pic.twitter.com/yrHkguOO02

Yes, LeBron James. You get a lot of the blame, too.

Statistically, LeBron had a very good 2018-19 season, averaging 27 points, 8.5 rebounds and 8.3 assists in 55 games. Those were great fantasy numbers. Unfortunately, we’re not playing fantasy basketball. At the end of day, we measure success by wins and losses. And LeBron lost a ton of games.

There were several games where the Lakers needed LeBron to be Superman and he turned into Blankman. No one will dare say but James has lost a step. He can’t turn the corner like he used to and he can’t overpower opponents like he used to. He relies way too much of his fadeaway jumper and doesn’t get to the rim as often. And when he does get to the rim, he doesn’t finish like he used to.

LeBron didn’t appear to be fully invested in the Lakers. He may be calling L.A. his new home, but he still hadn’t unpacked all his bags and left some important items in boxes. He seemed more interested in his post-NBA career than the NBA postseason.

Not everything Magic touched in his two years as Lakers exec turned into Avengers dust. He did some good things, too. He and Pelinka pulled off the impossible by moving the dead-weight contracts of Timofey Mozgov and Luol Deng. He was 5-for-5 with his draft picks, selecting Lonzo Ball, Kyle Kuzma and Josh Hart in 2017 and selected Mo Wagner and Svi Mykhailiuk in 2018. All five showed promised, although Svi got traded to Detroit so the jury may still be out on him. He was partly responsible for piecing together a very flawed roster for Luke, bringing in iso-centric players like Rajon Rondo, Lance Stephenson, Michael Beasley on one-year deals. Center JaVale McGee was the only player worth keeping.

If we had to grade Magic he’d get a C. He did an adequate job. He wasn’t terrible, but he wasn’t great either.

Magic Johnson’s failures as a basketball front office player doesn’t change the way we should view him. He’s still one of the greatest players in NBA history and gave us so much joy. He just wasn’t a good executive. Which is OK. Michael Jordan is a terrible owner and Larry Bird was a so-so general manager with the Indiana Pacers.

The Lakers issued a statement following Magic’s resignation, thanking him for “all that he has done for our franchise – as a player, an ambassador and an executive.”

“We thank him for his work these past two years as our President of Basketball Operations and wish him, Cookie, Andre, EJ and Elisa all the best with their next steps,” the Lakers said in the release. “He will always be not only a Lakers icon, but our family. As we begin the process of moving forward, we will work in a measured and methodical fashion to make the right moves for the future of our organization.”

Classy move by a world-class organization.

Now Magic can be Magic.